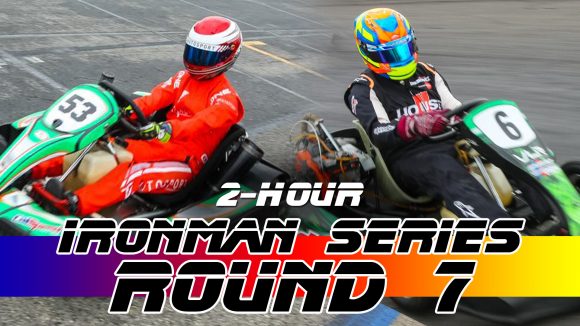 Round #7 of the CalSpeed IronMan Series would look a little bit different, as the championship saw its first 2-hour test of the year, taking to the Sportivo layout for the second time in 2018. Some drivers would elect to go at it alone, those solo entries making up twelve of the total 28 teams in attendance. The other two-driver squads would be in both the Pro and Sport divisions, and while a bit of a hiccup and curve ball was thrown this event, the action on track was no less exciting… 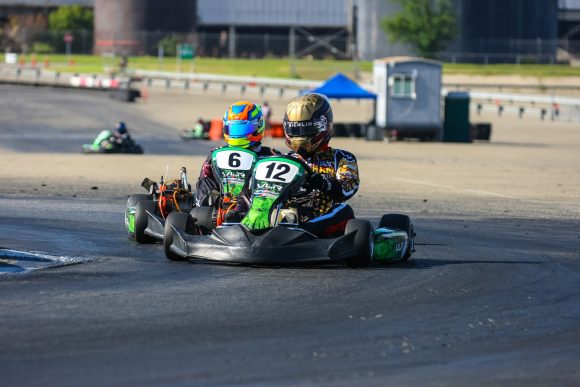 Each of the Pro Class teams would share driving duties in this two-hour contest, with season-long competitor Tony Wika bringing the field to the green to start things off. He would be joined in the first half of the race by fellow class regulars Charles Eichlin and Alexander Bermudez, with the latter two putting on an excellent show during the opening hour. While the pair would start 2nd and 3rd respectively, it would be Bermudez getting out to the lead on the opening circuit, with Eichlin following through for second by the end of lap two. Having seen that view before, Charles wasn’t about to let Alex lead things without a challenge, and stole away the lead as they caught traffic for the first time. Bermudez had no plans of playing follow the leader through traffic however, and the duo not only fought each other lap after lap, but also made things exciting as they scythed their way through traffic. Over the next 45 minutes or so they would trade the lead six more times, with pit stops playing a large role in the swapping of positions. Charles proved to be the quicker of the two in the pit lane, coming out on top on both occasions the duo came down for their stops, but Bermudez would fight back each time. At the end of the first half of the contest, it was Bermudez leading over Eichlin again, but it was clear that the first half of this bout was a draw. 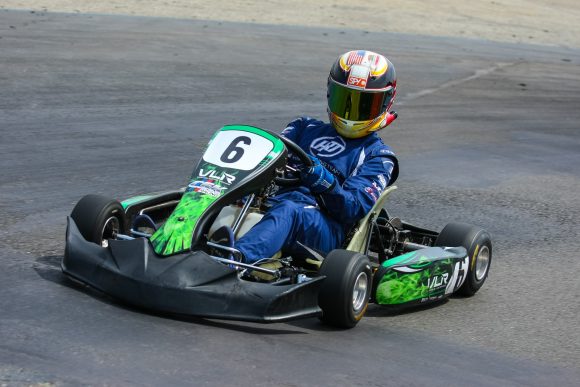 The second half of the event would see recent Super Series winner Jetson Lieser take over for Bermudez, Pro Class winner from earlier this year Diego Morales jump in for Eichlin, and SRF car racer Bryan Schubert take over for Tony Wika. Eyes would again be keen to watch the continuation of the battle for supremacy in the Pro Class, with Morales finding the lead on the first lap. Lieser was anything but content in the runner-up position, and after a few attempts, was able to steal away the top spot on the ninth lap in the second half of the event. The lead was short lived however, as karting veteran showed he had plenty of speed and tracks in his repertoire, taking over at the top after just a pair of laps. Lieser would be the first to blink for the pit stops, heading down pit lane on lap 19, but unlike the first half of the race, his rival was not quick to follow suite. Instead, Morales would continue to clock laps for about ten more minutes, maintaining the lead as he came out of the pits. Jetson was right there however, coincidentally cutting his fastest lap the same time Morales made his stop, and the two were again in a dead heat for the top spot. On the second stop however, it would Diego coming down pit lane first, and this time the advantage was clear as Jet exited a couple laps later. While the on track action had been fierce and exciting, this contest would unfortunately end at the scales. While Morales would cross the line first, he had lost more weight than anticipated -he had also run an hour in the Sport class prior to his Pro duties- and came up light at the post race weigh in. This turn of events awarded the win to Alexander Bermudez and Jetson Lieser, with Tony Wika and Bryan Schubert given second after the winners were relegated to third. While it wasn’t a win for Charles Eichlin or Diego Morales, they certainly put on one helluva show. 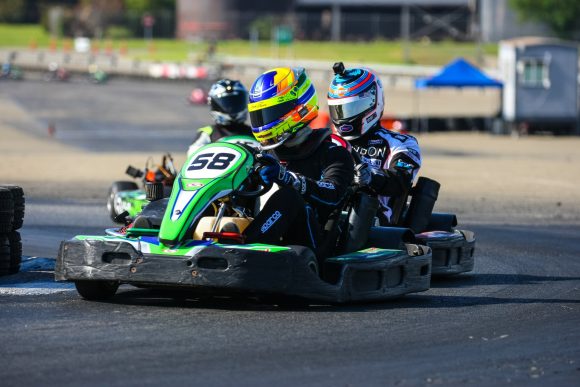 The Sport Class of the 2-Hour IronMan contest would lead off with Diego Morales at the helm, following right on the back bumper of the Pro Class as they went through the Bus Stop corner for the first time. Morales would be teamed up with none other than 2016 Super Series champ- Miles Calvin, trading his driving duties in the Sport class for the Pro Class in the second half. His lead off was a solid one too, maintaining the top spot for a handful of laps before linking up with regular 2018 front runner Chris Huerta. The pair would also have company in the form of Lukas Dziemidok and Jose da Silva, while former podium finisher Anthony Severson and Evan Karp hung on just off the back of the lead group. A bit of infighting on the tenth circuit would see da Silva come out on top, allowing him to squirt away to just over a second lead when all was said and done. While things would quiet down a bit at the front, Jose would be able to maintain his lead, while drivers from further back in the field methodically reeled in front pack. By lap 15, Sean Fite, Alyssa Yauney, and Taylor Hays had infiltrated the top ten, the podium finishers from the previous round looking to continue their winning ways. On lap twenty it was still da Silva out front, with Huerta and Karp linked up and managing the distance, but they all were now chased by a pack that ran eight deep. 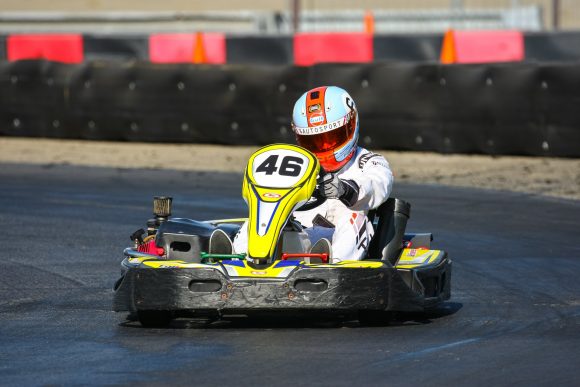 Led by Yauney, the chasing pack worked to reel in the top three, but things weren’t as tidy as they could be, and the group of eight began to whittle down as the laps clicked off. In fact in just a few laps, it was down to a trio of challengers; Yauney, Fite, and Morales. Of the group, Morales was the first to blink, coming down pit lane on lap 30, the rest of the group holding to the trend of late-run pit stops. Unfortunately for Morales, that would be the last time he would be in the top five in class, as the front group continued to work without him. Instead those first pit stops from the lead group would not come until inside the final ten minutes of the first half, but by that time traffic had really shook things up at the front. While there was no change at the lead, 2nd on back had a face lift; Yauney now led the charge, followed by Huerta, Fite, and Karp, albeit now almost five seconds astern of the lead. Pit stops would do nothing else to shake up the order, and when things resumed after the red flag stoppage for a scoring issue, the race took on a different complexion.

The start of the second half of the event saw the second drivers of the two-driver squads already in the seat, making for some new faces -but same teams- in the fight for the win. As one of the solo entries, Yauney took over the lead from da Silva’s teammate and 206 Masters champ Mark Connell from the get go, while Huerta, Fite, and company slotted in line. By lap ten a lead group had formed consisting of Yauney, Connell, Dziemidok and Adam Nagao, who had taken over driving duties for the aforementioned Taylor Hays. Unlike the jockeying for position in the first half of the event, the second half was more about clicking off laps, and being in the right position in the end for a strong finish. The near processional run saw virtually no fight at the front, with the lead group staying unchallenged, with the only change being it shrinking down to three as Dziemidok slipped off the back of the group. Not even pit stops threw much of a wrench in things, and it was Alyssa Yauney coming up with her first IronMan win of the season, with Adam Nagao and Taylo Hays rebounding with the luck of the red flag to snag second, while Mark Connell’s steady drive to third earned a podium for him and Jose da Silva. 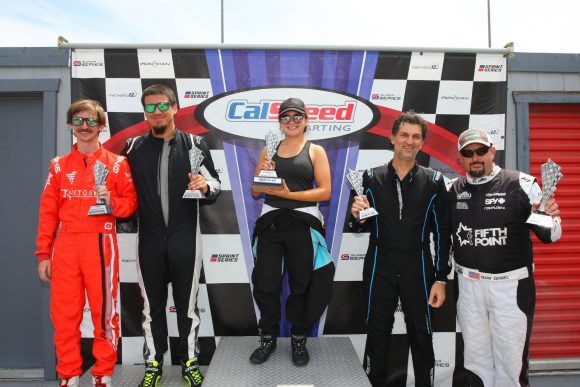