New Faces Under the Tent and On the Podium for CSK in Round #3!

The third round of the 2018 Tri-C Karters racing season saw the warmest temperatures yet, and with it several hot performances from some new people at the sharp end. CSK Racing hosted a few new faces under its tent this time around, but it was the veterans coming up big when the final checkers fell on the Grande configuration this past Saturday… 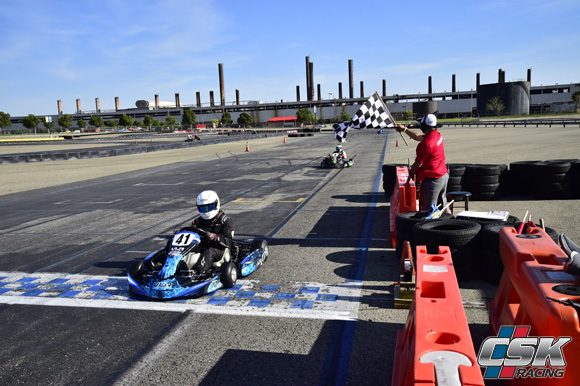 Mark Connell was the first to make some noise in the VLR Spec 206 class, earning pole position over TJ Blackledge and Rob Brackett to start out the day. When the checkers fell on the first heat race it was status quo in the top five, except for Blackledge who was able to counter an attack from Connell on the final lap to score the heat 1 win. Heat two would see a quartet at the front, as the top two were joined by Rob Brackett and Michael Middleton, the latter a new face at the front. This time it was Connell that led the opening half of the heat, with Blackledge taking over the top spot, and eventually holding on to sweep the heats. For Brackett, he would stave off an attack from Sean Bradley early, but could not get the move done on Middleton for third, the duo going 3-4 for both their heats.

In the Main it would once again just be a one-on-one fight between Blackledge and Connell, with the latter again getting the advantage at the drop of the green. Last round TJ came oh-so-close to his first win, but this time he was not going to be denied, crossing the line first with Connell second, the pair tying for the fastest lap of the race in the process. Behind them it was a three way fight for the final podium spot for the early part of the race between Middleton, Bradley and Lukas Dziemidok, with Middleton finding his way by to earn his first podium of the season! 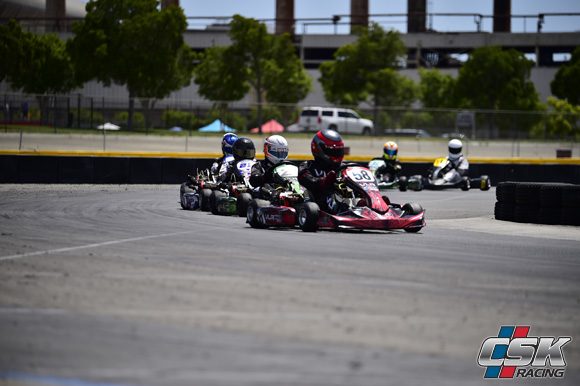 With Jake Hood absent this round it was just Derek Esquibel and Mike Smith taking to the track in 206 Senior for CSK Racing, and once again they were in the thick of the fight, starting with qualifying where they went 2-3 respectively. In the heat races Esquibel would hold on to score a pair of well earned wins, while Smith found himself fighting every lap to keep the rest at bay. For him it would be a third in the first heat, and then a fifth in the second heat after attempting a pass for second in the final corner.

The Main was an eventful one for the CSK Racing teammates, with Derek leading away from the start, with Smith working up to second by lap two. Just before halfway Mike made the move for the lead, but would bicycle up onto two wheels in the attempt, falling back to 5th in the process. Unfortunately Derek also lost out in the attempt, falling to 4th, albeit still in touch with the leaders. On the final lap he was able to capitalize on a move through Kornakurva, moving up from 4th to 2nd in one corner, settling for second place at the stripe. 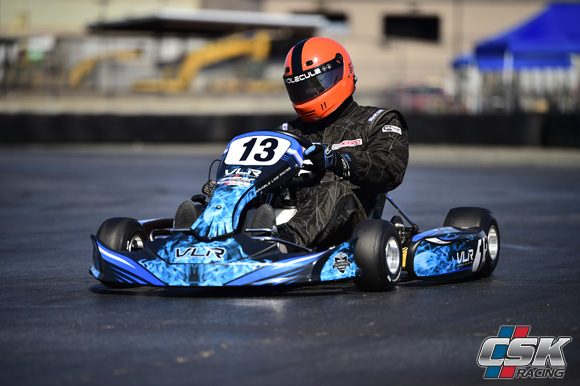 The Masters 206 class started with a new face at the sharp end, as Lukas Dziemidok scored his first pole position of the year over Rob Brackett, Mike Smith, and Mark Connell. Once the green fell for the heat race however, the more experienced Brackett, Connell and Smith attacked and were 1-2-3 respectively after the opening circuit. They would stay that way through about halfway, when Smith capitalized on an opportunity and went from third to first, eventually holding on for the heat 1 win. In that same move however, Sean Bradley was able to make something happen, and moved up to third ahead of Brackett, with Connell settling in for 2nd.

The second heat race was a bit less eventful at the front, and Smith would hold off Connell for first, the duo comfortably ahead of the rest of the pack. Behind them however it was a fight for third, with Bradley losing the spot after a couple of laps to the pole sitter Dziemidok, only to snag it away again in the final lap.

The Main would see the front three unchanged once again, as Smith would lead Connell and Bradley, the trio working together to widen the gap to the pack behind them. This was made all the more easy by the infighting going on for 4th, with the gap eventually growing to almost ten seconds. Out front Bradley just lost touch towards the end -albeit with the fastest lap of the race- giving Connell a chance to try for the win without pressure coming to the checkers. The two would battle in the final two corners, but Smith held on for the win, the front three sweeping all three races in the same order. It was the first podium finish for Sean Bradley, showing that he’ll be one to watch the rest of the season!

CSK Racing would like to again thank all of their customers for coming out to round #3 for the 2018 Tri-C Karters season, and we’re looking forward to round #4 on the Sportivo configuration on June 30th. Want to get in on the fun? Hit us up to get on track in one of our rental packages, or inquire about how you can get coaching from some of the best in the 206 business. And remember, CSK Racing offers VLR kart and part sales trackside at CalSpeed Karting, so feel free to hit us up for all your VLR needs!