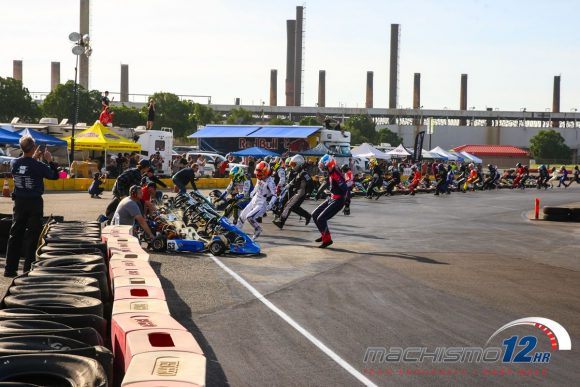 The 10th annual Machismo 12 Hour Endurance race proved to not only be the biggest in the size of the field, but also the most talented, and in the end, it also had the closest ever finish. 35 teams across three classes, 683 laps filled with traffic, passing, strategy, and sometimes the fight to just go on, never mind against the track or your fellow competitors. It was by far the best Machismo event to date, and a fitting way to celebrate a decade’s worth of these events. CalSpeed Karting would like to thank everyone for coming out, and we look forward to what next year will bring. Here is a quick look at how the podiums shook out after 12 hours of racing at the 2017 Machismo 12 Hour Endurance Karting Event… 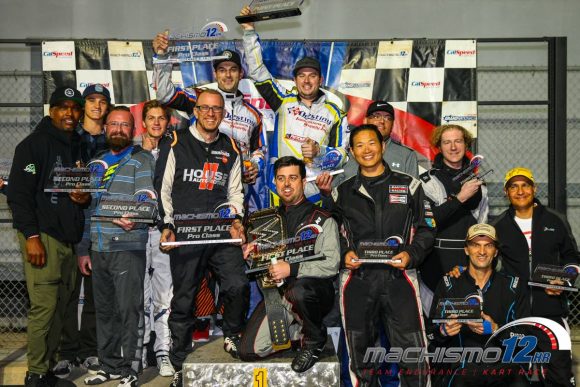 Utilizing the VLR 206 package, the Pro Class is the fastest of the three classes, and not only goes for the class win, but the overall victory as well. Here in 2017 we saw teams owning their own kart allowed to enter for the first time, and it would be one of these owner teams putting it on pole for the 10th annual Machismo during Friday night’s qualifying session. 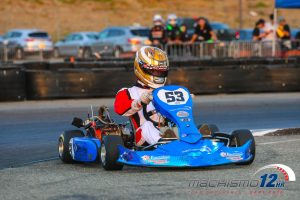 Jake Hood – All in Too Racing

Team All In Too would come away with the top time in qualifying via their driver Jake Hood, their #53 and vibrant all-blue livery leading the way for the field of 35 on Saturday. The hole shot however would go to Racers For Christ’s Pro entry, as Global Rally Cross and veteran kart racer Christian Brooks would get away from the start first, proceeding to click off fast laps. Brooks would go unchallenged for his stint, eventually lapping the field before handing off to his teammates for their required stints. 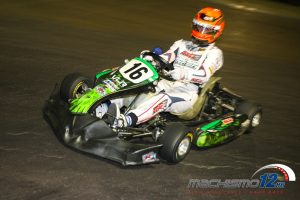 With Brooks relieved, their challengers began to reel in the the lead squad, with team SPV-505 eventually taking over the top spot, becoming the team everyone else chased to the end. Other teams came close and applied pressure throughout the event, but coming down to the final laps it was still SPV-505 out front. Their lead was strong enough that eyes drifted backward to the battle for the final podium spots, while Wu Tang Gang Pro’s advantage over the charging Christian Brooks was dwindling. ‘The Gang’ had been consistent, mistake free, and without incident to have the second spot, but the sheer pace of Brooks was just too much in the end, and they would slip back to third at the flag. 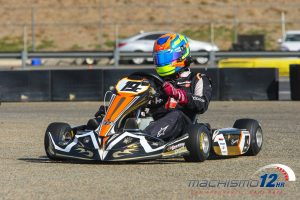 In the end it would be SPV-505 bringing home the victory, with all three of the podium finishers finishing on the same lap, proving just how close the race was at the end. For the winning drivers -Logan Calvin, Miles Calvin, Patrick Britain, and birthday boy Alexander Bermudez- it was not a race without its own share of drama, as the team was able to bounce back from a mechanical issue in the dusk hours to bring home victory. 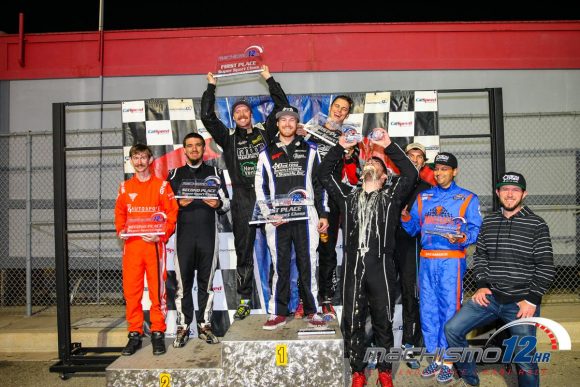 Unlike the other two classes, the Super Sport category would be controlled by a single team for the duration, Andlogical Logistics Racing. Scoring pole position on Friday via team leader Darren Mercer, they would back it up with the class hole shot into the first corner via KC Cook’s starting prowess, and essentially never look back. 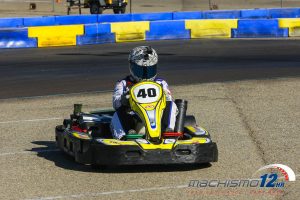 Bolstered by teammate Cameron Jocelyn, the three-driver squad was fast, consistent, and mistake free for the entirety of the 12-hour contest, and essentially never relinquished the top spot. It was a dominant performance in a very competitive field, and a well earned victory by over two laps to the second place team, with a comfortable three laps to the final podium spot as well. 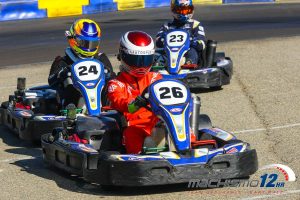 As much as the top spot was in hand, former Machismo champs T4 Red would also have a strong hold on the runner up position, as Taylor Hays and Adam Nagao did everything they could to pressure the top team. Bouncing back from qualifying woes that saw them start from 8th position, Hays showed why he was one of the best, scything through the field of sport kart teams to get to 2nd place in just 8 laps. They would close to within just a few kart lengths in that first stint, but aside from a brief stint out front during varied fuel strategy, they would stay in the runner up spot for near the entire run. They were definitively in control of that position though, while the fight for the final podium spot raged on behind them. 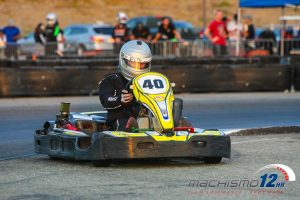 The final S1 Class podium spot would be decided in the final few minutes of the 10th Annual Machismo, playing out more like a sprint race than an enduro. T4 Black had the position, but was chased down by the 2016 champs and team leader Sean Fite, with Fite getting to the back bumper with about 15 minutes to go. They would exchange positions at least five times between then and the end of the race, fighting not only each other but traffic as well, with Fite bringing the final podium spot and fastest lap of the race home for the Glorious New Day. 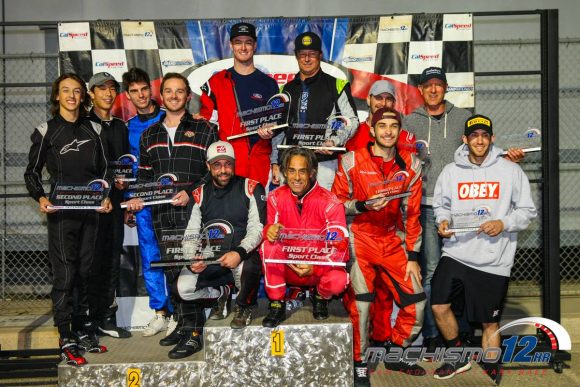 Like in the Pro division, the Sport category had multiple teams show strength during the event, but with one team coming out a little stronger than the rest. Sport Class pole position would be scored by Hold My Beer Racing’s Diego Alvarado, who also took the opening stint duties, maintaining the top spot for the opening couple of hours even after a couple of driver changes. 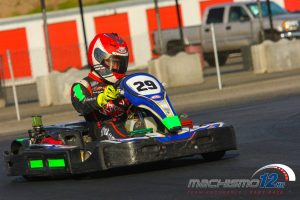 There was one primary challenger for the team fastest in qualifying however, specifically Sofa Racing. They would work up into the second spot in the first 15 minutes after starting 3rd, and slowly but surely would begin to reel in the leader, with the top spot finally changing hands for the first time just after the pole sitters made a fuel stop about two and a quarter hours in. From there however Sofa Racing would never relinquish the lead, going 9+ hours out front, keeping the top spot via both strong and consistent pace, and smart strategy. The Team of Scott Milne, Tony Wika, Sean Wika, and Joe Sabella had put in a lot of practice leading up to the event, and it showed once it was time to shine for a well deserved win. 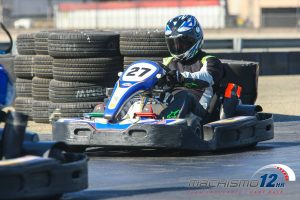 Behind them however it was a dogfight for the next two podium spots, and with some of the leading teams either having mistakes or misfortune, a pair of squads came from under the radar to snag 2nd and 3rd on the podium. After working from the depths of the charts in the opening few laps of the race, both Baguette Racing and Enterprising Spider Racing picked away at their competition, slowly moving up the ranks until they were in position to capitalize at the end. Baguette Racing -the fastest of the leaders and also 2nd fastest in the class- saw themselves in a battle with not only the Enterprising Spider entry, but also the Make America Race Again team. While all three were on the same lap, Baguette was able to keep a decent cushion on their spot, while it came down to the wire for third. In the final fifteen or so minutes, ‘Race Again’ was able to reel in an almost 20 second gap to be within two seconds on the white flag lap, and coming out of the final corner it was a drag race… With Enterprising Spider Racing holding on to third in class after 12 hours by just .087 seconds. 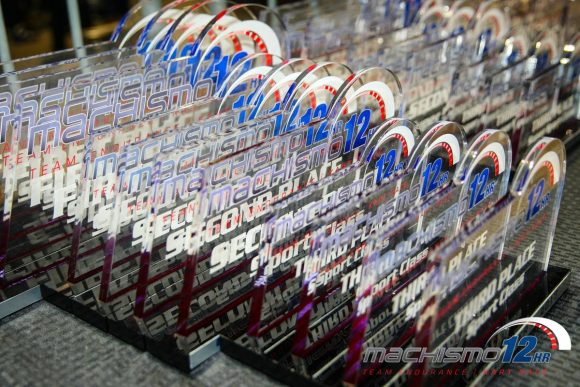