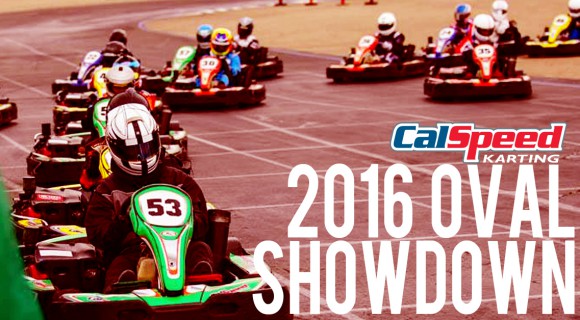 The third annual CalSpeed Oval Showdown would host some of the best wheel-to-wheel racing seen at the So-Cal track all year, including last lap passes, photo finishes, and even wins via strategy a la the 500 itself. In the end it would be first-time entrant Logan Calvin claiming the win in the 2016 event. 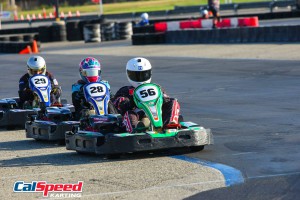 The event started out with practice before starting qualifying for each driver, where ‘The Showdown’ emulates Indy with a 4-lap best average qualifying run to determine the groups and starting positions for the first set of heat races. While the track was virtually unchanged from last year, drivers commented that it felt it had more grip than in 2015, and the lap times seemed to show it. Last year’s qualifying time was beat by more than a tenth and a half, but the key to qualifying stayed the same: be fast right out of the gate and stay consistent. Many drivers put down a single fast lap, but were unable to do it four times, with Aaron Downs coming out on top as the overall pole sitter with a 4-lap average of 21.610 seconds. Downs would start from pole in heat 1a, while Cameron Jocelyn and Logan Calvin started from pole in their respective heat races after going 2nd and 3rd overall.

The first set of heat races saw close finishes across the board with Mark Connell bringing home the win over Aaron Downs and Luis Calderon in heat 1a and Miles Calvin ahead of Alyssa Yauney in heat 1b, but it was the photo finish in heat 1c that had the spectators on their feet. Coming to the checkered a last-chance move to the inside in turn #3 by Bruce Allen saw he, Logan Calvin, Diego Morales and Taylor Hays all come across as one, with Allen snagging the victory by just .004, and the group of four separated by just .085 seen in the video below.

The starting grid and groups for the second set of heats would be set from results of the first heat races, with the top 10 of each group inverted. As was the case in years prior, this gave several new faces a chance to see what it is like starting from the front, while those that had already spent some time there the challenge of working through the field. With varying levels of difficulty, Luis Calderon, Taylor Hays, and Chris Huerta all came across victorious in their heat races, setting the fields for each of the upcoming Main races. 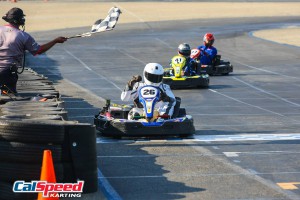 Pit stops would come into play for the first time all day in the Mains, with the 40 Lap C and B Mains needing a single pit stop, while the 60 lap A-Main would see it’s drivers need to stop twice. While varying strategies were employed throught the field of each Main, it was the early stop strategy that proved to be the winning combination in both of the first two 40 lap contests. In the C-Main, Steve Jasinski pulled in at the drop of the green from about mid-field for his required stop, ducking out of line before losing time in the turn one scrum. The strategy allowed him to leap frog just about everyone via the pit stops, with just a brief tussle with Thomas Blackledge to get through before snagging up the C-Main win. 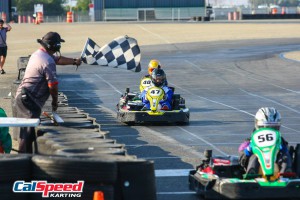 The B-Main would see a similar race unfold for the young Cody Calvin, but he would do it from the 3rd starting spot. Like Jasinski before him, Calvin was able to not only keep from losing time during the first lap melee, but was able to move passed his competitors when they made their own trips down pit road. However unlike the C-Main, Calvin would have to fight off another driver for the win, with competition karter Tyler Coffman stealing away the lead with a little over five laps to go. A last lap move from Calvin would be the key, stealing back the top spot and the final transfer to the A-Main by just .326 seconds over Coffman.

This would complete the 19-kart grid for the 60 lap A-Main, with Miles Calvin and Bruce Allen on the front row via there win and second-place results in the heat races, with the nod going to Calvin because of his .049 better average in qualifying. At the drop of the green it was Miles Calvin ducking in to be the very first down pit road, but he would take it one step further by doing his second pit the very next lap. Not the only one to adopt this aggressive strategy, Allen would follow suit and pit on laps 2 and 3, the duo staying attached to each other for the duration of the race. The rest of the front runners went with a couple of varying strategies, with some electing to split their two stops through out the race, while others till stayed out for a longer run to the first stop. Of the former, Logan Calvin would make the most drastic of the splits, and would maintain the advantage over the other split strategy drivers once they made their own initial stops. 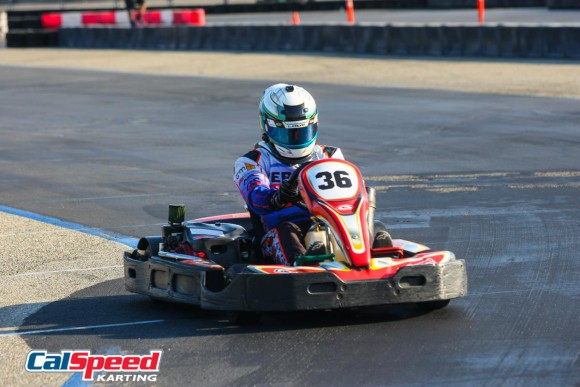 One thing that was interesting about the double-pit strategy is that it put those drivers right with the leader who had not pit at all yet, with Calvin leading Allen, Mark Connell, and Nick Marascio; with Connell the overall leader and Marascio joining the lead duo of double stoppers. This train of four drivers stuck together pounding out the laps until about the 2/3 mark when disaster struck for Connell. Exiting the pits after his second and final stop, 2015 Oval Showdown winner Chris Huerta misjudged in a dramatic and violent way, running into the side of Connell, putting the overall leader into the turn #3 wall. This would end the chances of victory for both drivers, with Connell rejoining to eventually finish 12th, and Huerta sidelined with a black flag penalty. 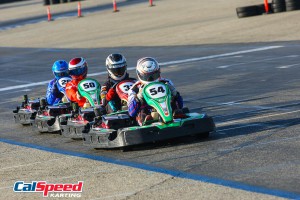 This would make it a trio of drivers together that had finished both stops, turning into four a couple laps after that Connell incident after Taylor Hays finished his second stop to join them. The quartet looked to be the fight for the overall podium, and indeed even into the final laps it seemed that the win would be decided amongst the group. Calvin would lead from Allen, Hays and Marascio as they took the white flag, with the moves coming into turns 1-2. Allen looked to have a shot down the back straight, but Hays and Calvin fought back in the final corners, with Hays beating Calvin to the line, followed by Allen and Marascio. But this wasn’t the fight for the win, but indeed for second through fifth. On his own split strategy, Logan Calvin would maintain the advantage he had from the 3rd starting spot, and while he ran most of the race himself, he would put in the fast lap to leap frog all in the pit stops, bring home the win in the 2016 CalSpeed Oval Showdown. 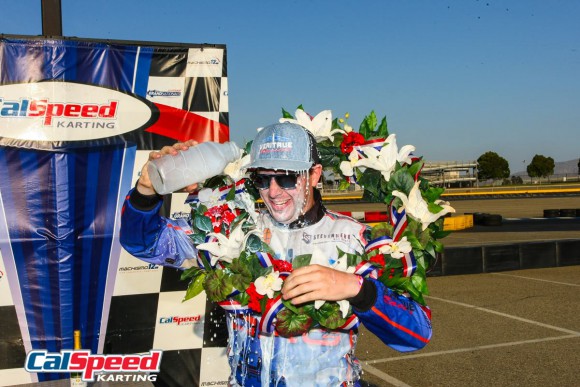 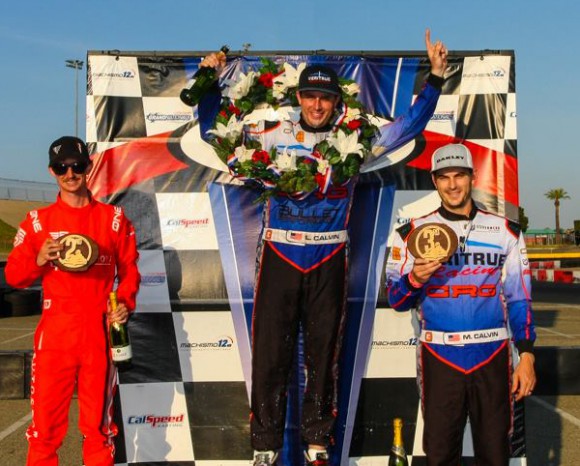