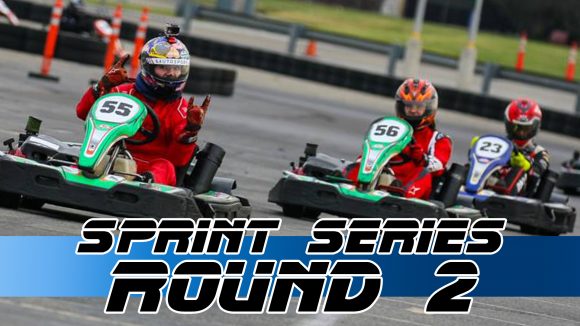 An unusual uptick in the temperatures brought a beautiful and warm California day in January for the 2nd installment of the 2018 Sprint Series. The Tecnico circuit, a favorite for many drivers here at CalSpeed, added to the excitement for race day. What was already looking like a perfect sunny day would also become a perfect race for just one driver…

While most didn’t break the 1 minute threshold, it wouldn’t be until the 3rd and final session that drivers started taking to the 59s. Driver after driver went purple over the duration of the session and it was unclear who would grab that best time. Ultimately, James Lieser would earn the coveted top time of the day by a slim .008 over Lukas Dziemidok, making this his first career pole in the Sprint Series. 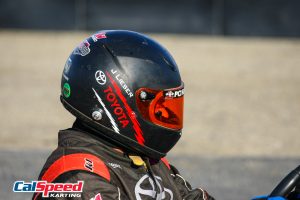 Surely fueled by his pole position, Lieser held the torch for heat 1A and never looked back. The battle for P2 began to brew between Diego Alvarado and a slew of drivers invading in rapid succession. Very quickly, the infighting led to Lieser and Alvarado cruising away unpestered while Maximilian Bui and Ivan Martinez took to dueling for the third spot. With only a corner left of the race, Martinez would almost have the advantage through bypass but Bui’s greater exit speed earned him the 3rd spot after Lieser and Alvarado for heat 1A. 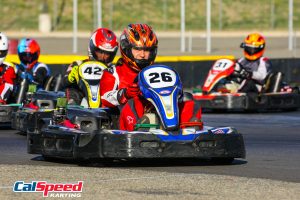 Heat 1B saw shuffling of the top 5 quickly after only one lap. Spencer Russell in second jumped to the lead in front of Dziemidok while Tony Chen, beginning in fifth, also stole away into 3rd ahead of Frank Hsu. This 4-man group went corner to corner with little space inbetween one another. Dziemidok and Chen wrestled for P2 each time by in turn 4. By the time the white flag arrived, Dziemidok had managed to steal away the lead from Russell while Chen and Hsu took to a side-by-side final lap with the former grabbing P3. 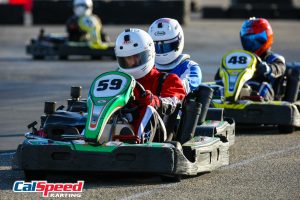 Randy McKee stormed ahead with Sam Hunt and Seth Willits in tow, the pair very quickly going for passes through the Esses. With Willits now in second, all became quiet. At the halfway mark, a blue flag looming ahead promised to throw the proverbial wrench into the front pack but luckily that story ended without comment. With one to go, Willits took the reigns followed by Hunt and McKee and the three would cross the finish in short order. 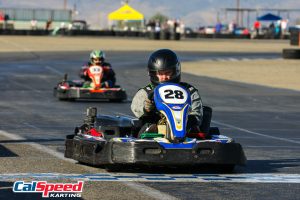 Races don’t always go perfect and sometimes, it means starting further back in the mains than one usually would. That is just what happened this time around, as drivers Evan Karp and Tom Zevin showed their dominance during the C-Main. That said, this would be an easy win for Karp as once the green went up, he was unchallenged the whole way through from his pole position. Zevin on the other hand, started 19th and jumped a whopping 16 positions to slot behind Benjamin Potter, 2nd, to wrap up the C-Main in 3rd place. 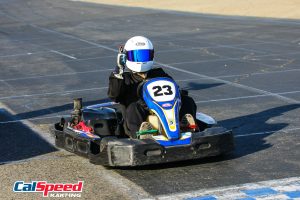 In the B-Main, top three Robert Hernandez, Edgar Machuca, and Feras Faraj took to racing at the drop of the green. This led to Faraj taking lead away from Hernandez. Meanwhile, Jeff Latimer snuck in on the group and had situated himself just behind Faraj and Machuca. The P2 position became rapidly engulfed in a cluster of drivers but Hernandez and Machuca were able to stave off the attack, allowing Faraj the benefit of a 15+ kart length lead. These three would wrap up the B-Main with Faraj across the line first followed by Hernandez and Machuca. 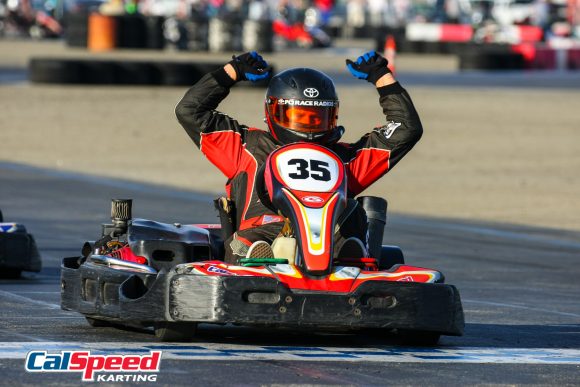 The A-Main began with the top 5 maintaining position through the first lap. It was a calm before the storm as leaders Lieser and Dziemidok began gapping the rest. The latter would grab the lead in turn 4– in turn, Lieser’s attempt at an overunder onto the straightaway was met with a closed door. He regained the lead once again at the Tecnico hairpin and grew markedly defensive in his line choice from this point forward. Meanwhile Diego Alvarado sat in wait behind the pair. With the top 3 bumper to bumper, Dziemidok constantly showed his eagerness, taking peeks for a pass at every perceivable chance. The white flag approached and the air remained heavy. Lieser stayed defensive for the entirety of the final lap while Dziemidok stayed glued to his bumper– Lieser’s shallow line brought Alvarado side by side with Dziemidok. Lieser took the checkered for his first Sprint Series win while contact during the final lap saw Alvarado promoted to the 2nd spot on the podium! 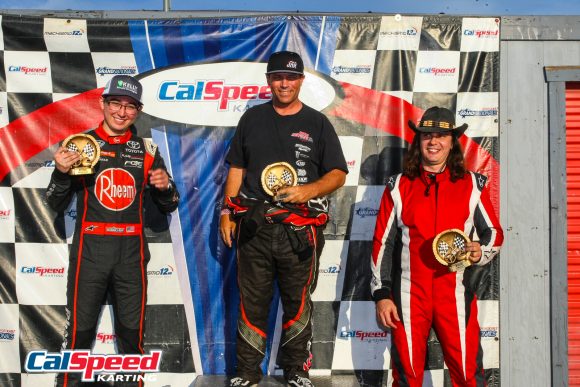