For the first time in CalSpeed history it will be the IronMan Series that will open up the arrive and drive season, taking to the Nuovo configuration for the 2017 season opener. While not much has changed in the rules in this, the eighth season, the fine tuning that has happened since last year should help make an already challenging championship that much better. It will also see the return of all of the primary contenders from 2016, once again looking to do battle, this time over the course of a 10 race season.

The IronMan Series is the home for endurance racing aficionados here at CalSpeed, coupling speed and strategy in equal parts to come out on top during the one-hour test. There have been six different champions in the seven years of this series; will 2017 provide number seven, or could we see one of the three former champs become only the second two-time winner? Only one way to find out, and that is to get this thing started; so let’s take a closer look at what’s in store for this season, and what our drivers will see for round #1!

This year will be the third in the current format of the rules, with very little changing over the course of the three seasons; inverts, bonus points, two pit stops – it is all the same heading into the 2017 campaign. There are some very small changes to the series however, possibly being looked at more like procedural things than anything else, but still could make an impact on a driver’s race. To start with, lets talk about just that; the starts. Over the past couple of seasons a few different forms of standing starts have been in place, and although last season was a clean one in that regard, this year drivers will be taking off from a rolling start instead of sitting still. It will be of the single-file variety however, as we are still looking to make sure things are tidy heading through the first few corners. This should however eliminate the subtle clutch differences in the field (something nothing can be done about to avoid) and it will also be good practice for the A-Main starts in the Super Series, which will also be rolling (except double file). The only other noticeable change is in the way mechanicals are being handle; as the endurance arm of CalSpeed’s lineup, the IronMan Series will get even closer to its big brother it tries to emulate, the Machismo 12 Hour by giving time back. If a mechanical issue happens inside the first 45 minutes, a driver will be put back as close to where they were running before, as well as the same lap they were on. If a mechanical happens in the final 15 minutes, then the standard ‘points credit’ system will take over.

Other than those two things, these drivers will be doing battle for an additional two races this year, as the championship grows from 8 races to 10, and they will now have an additional drop; two instead of one. The two sub-championships have also been lengthened; the season now split by two ‘best 4 out of 5’ titles, the Winter and Summer sub-championships.

Round #1, Nuovo: What to expect? Recent weather could make for tricky conditions… 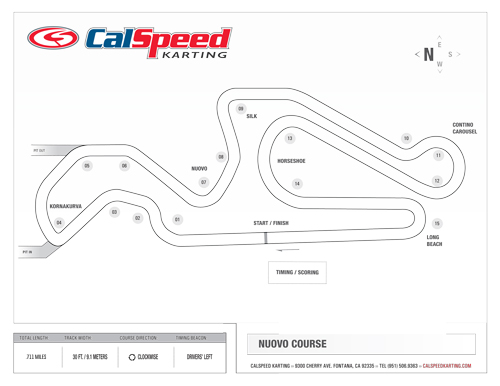 For the past couple of years the IronMan Series has started after the Super Series did, and with the old Oval Race taking place during the May weekend, the traditional placement of the Nuovo configuration saw no endurance race date. This year however it is the IronMan Series kicking things off, and it will continue to precede all of the Super Series events this season. This means that where ‘The Super Speedway’ has been absent for the past two years, it is now back on the ticket for two weekends, running again for round #6, where it will kick off the second half of the season as well.

It has been well documented that Nuovo brings up a love-hate relationship for many drivers; In the winter the place is nearly flat out, and in the Summer when the grip is typically higher, we see an already extremely high throttle percentage grow even more. That will still be the case the for the 2017 opener, but with an immense amount of rain preceding the event, and relatively cool temps expected on race day, grip will be at an all time low. Drivers will need to exercise a bit more footwork then is typical for this track, perhaps lifting in corners where they would normally keep things matted. This could also make the very quick pit entry and first stop box a turning point for drivers, especially those pushing the envelope when making their two required stops.

Being a bit slicker conditions, the closely packed line of karts could see a bit more accordion than normal, as the drivers in front struggle to keep traction while punching a hole in the air at the same time. That draft and smooth driving from the following karts could see the closing rate be a bit quicker than usual, and drivers will need to be on their toes when in a tight nose-to-tail pack. Going off the normal line could be an interesting proposition when looking to pass as well; again with the lack of driving over the last few days and with the rain that has pummeled the facility, the difference in grip when making the attempt could catch a few people of guard.

Everything will start with qualifying however, customary for the first round of the season. So not only will things be difficult in the race, these drivers will need to find that little bit more in the lone qualy session of the season. Many of whom having not driven a lap for over a month when the green flag flies on the session… 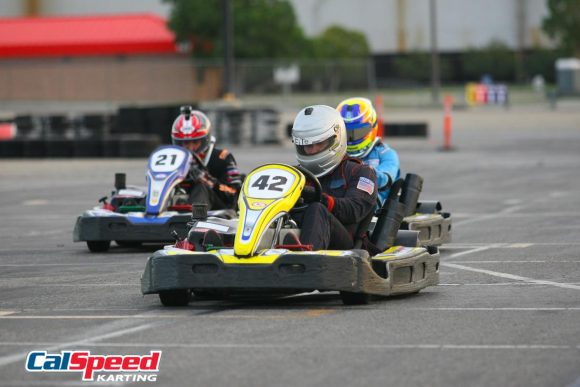 As was mentioned before, this series is now in its 8th season, and the history behind it is becoming richer and deeper with every passing year. It has had six different champions over the years, names like Adam Nagao, Taylor Hays, Patrick Britain, Bill Myers, Sergio Bravo, and Jon Kimbrell; Kimbrell the only one of the bunch to win the overall championship twice. The past couple of seasons have seen three drivers dominate the top ranks, as Nagao, Hays, and Sean Fite have brought home the sub-championships; Britain and former National champ Aaron Downs taking them home in the inaugural year, while Hays swept it all in 2015.

The race wins column sees Sergio Bravo lead all drivers in wins with seven, four of which coming on the track we run on this weekend, Nuovo. And while he has won four times on one track, three drivers share four wins a piece for second in the stat books, which is where Kimbrell Nagao and Diego Morales sit. In all, the win list is a short one in this series with only 24 drivers having found the top step; a pair having earn ‘half wins’ back in the days of driver swaps.

There are other stand out numbers in the series stats too, like Jon Kimbrell with an incredible 20 trips to the podium; or Sergio Bravo’s astounding 13 fastest laps, nine more than anyone else. This series is full of history when you look at the stats…

But the record books aren’t the only numbers these drivers will be chasing down, nor will it be just wins, podiums or fast laps; it will be bonus points that many will push for. The past two seasons have seen how leading laps can become a deciding factor in championships won, with 3 points earned for leading a single lap, and 2 more for leading the most. This was a big part of both overall championship runs the past two seasons, with Hays earning 19 bonus points in 2015, and Nagao 18 last season; second to them both years? Sean Fite with 12 and 15 respectively; the latter being the deciding factor in what earned him the Summer Championship.

It is round #1, and the nice thing about season openers is the clean slate; everyone is tied for the lead. But that only lasts until the end of the first lap. So who will score the first points of the season for leading the lap 1?

Overall Championship: Who to watch for in 2017…… 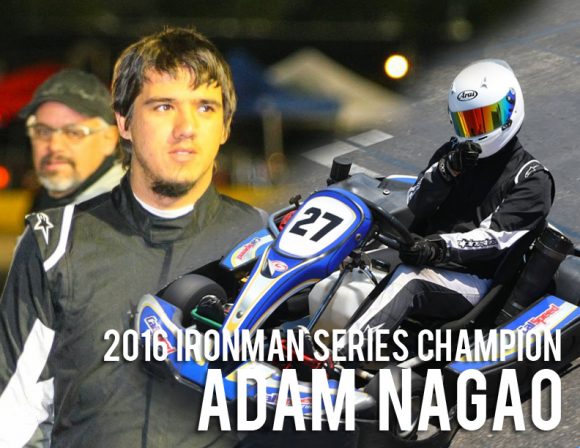 The past two seasons have seen the championship go to dominating hands; Taylor Hays in 2015 and Adam Nagao in 2016. However, Sean Fite has emerged as the #1 challenger heading into 2017, having nipped the 2015 champ for the second step on the podium in the final round last season. These three drivers are certainly the primary contenders for the hardware in 2017, but there are still a few others that will certainly be in the hunt. Topping that list has to be Diego Morales; 2-time winner in 2016, Morales did not run a full season, and was a last minute entry on more than one occasion when he did get in the seat. A proper full season effort from the veteran racer will certainly see him vying for the title with these other three.

Along with those four drivers, there is a host of talent that could also be ranked as challengers for the sharp end right out of the gate. Super Series race winner Henry Morse; IronMan round winner during the 2016 campaign and former series runner-up Steve Spring; podium finisher Alyssa Yauney showed late-season strength; as well as season finale winner Chris Huerta could all been in the hunt with a full season run. There are several others on the list that could surprise as well, and it will be interesting to see who comes to the fore starting with the sole qualifying effort of the season on Saturday. They’ll all be chasing the top three from last year, each setting the bar for what is needed for a podium performance in 2017:

And while 2017 will see the return of the entire top 5 in the championship from last season, as well as 9 of the top 12 in the points, there are a few familiar names, as well as some possible one-off entries that could shake things up. Aside from those drivers we are used to seeing at the sharp end from last year, two names stick out at me on the entry list: Jose da Silva and Aiden Yoder. Da Silva is a former overall podium finisher in the Ironman championship, and having been a former pole sitter and winner in the series, could make some series noise tomorrow. Aidan Yoder raised a lot of eyebrows with his podium performance in the rookie standings in the Super Series last year, and will be making his first start in a CalSpeed Endurance event this weekend. I am not sure if we’ll be seeing either of these drivers for a full 2017 IronMan Series campaign, but if we do, I expect to be talking a lot more about each of them.