Morales Goes From Last Minute Entry to Round 1 Winner

Endurance racing at CalSpeed Karting takes the form of the IronMan Series every year, with the eight round championship taking the green flag this past Saturday on the Sportivo circuit. With the location of the standing start the only real change to the series for 2016 (moving to the main straight from the top of the course), drivers have a really good grasp on what it takes to win a title in this championship. This is strengthened by the bar set by defending champ Taylor Hays, where consistent podium finishes proved to be the key to the overall and sub-category wins…

As is customary for the first round of the IronMan Series, the field would take to the course for a green/white/checkered qualifying session, the only time this happens all year, as the field is inverted from rounds 2-8. Hays would start his title defense in a very strong way with a time good enough for 2nd overall, but it was Diego Morales that would secure pole position when the checkers fell on the session. It was a strong start to a day that looked like it may not even happen, as Morales was a late entry via a last minute cancellation.

Unlike many of the starts in last year’s campaign, the start to the 2016 season would go off without a hitch, with drivers slotting into a line 30 karts deep without any major incident. In fact, things would stay nose to tail for much of the first part of the race, as drivers would only slightly jostle about to see who needed to lead who for the best shot at the front. 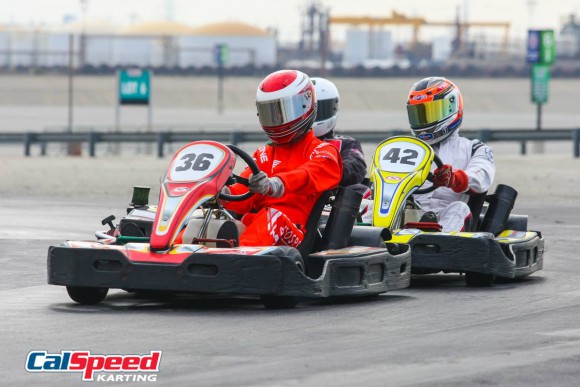 Speaking of the front, it was all Morales from the get go, leading for the first 42 laps until he finally made his first stop. The aforementioned Hays could not be shook however, and he had the tow hooks firmly in place to stick right with the leader for the duration. Aaron Downs would eventually reel in the top two as well, but behind the top three things were not so cut and dried, as a variety of strategies would take place up and down the field.

Unlike some of these races in the past, pit stops would start from the drop of the green, and continue to happen throughout the race, albeit from drivers a little further back. Former champ Sergio Bravo looked to roll the dice an improve on a tough qualifying run by pitting right away at the start, and would be joined the very next lap by another former champ in Jon Kimbrell. The two would work together to try and make up ground, having started in 18th and 20th respectively, and would make decent inroads to the front.

With much of the back half of the field making sporadic stops throughout the first thirty or so laps, traffic would play a part in whether or not drivers stayed in a pack, and drivers would start peeling off into pit lane once they lost a footing in the group they were in. Alyssa Yauney was the first of the drivers inside the top ten that would head down pit road, losing the group she was in after getting held up in traffic a bit. That main group held 4th-7th, with 8th-10th splintering off before stops began.

At the front it would be Morales finally ducking in on lap 42, relinquishing the lead to Hays, who proceeded to stay out for a pair of fliers before coming in to make his first of two stops. Known for his efficiency and speed in pit lane, Hays did it again with a stop lap that was better by .7 or so seconds, leap frogging ahead of Morales in the sequence. Morales pit sparked stops from the rest of the trailing group that had rode about 5 seconds behind the top three as well, and once the first set of stops was in the books, that advantage had grown to 8 seconds, making it well and truly at three-way fight for the win, and the final podium order. This second group that housed Mark Connell, Steve Spring, Nick Marascio, Adam Nagao, and Marcin Balazy had stayed together for much of the race, all battling for the spots just off the podium. Connell led the group for a good amount of time, while Nagao pushed to get inside the group, but after the final stops the two and everything in the middle would swap spots. 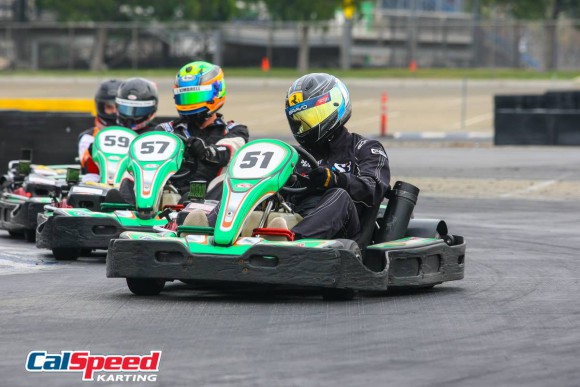 Now a little past ¾ of the way through the 60 minute race, the varying strategies were starting to show what fruit they had to bear, and decisions needing to be made for the final push to the finish. The aforementioned duo of Bravo and Kimbrell found things hard going, as traffic definitely had an adverse effect on their trip to the front. The duo would keep working together, and with others as they occurred via pit stops, but the turning point cam on lap 51 when Kimbrell ducked in for his final stop. This would put him in clean air, and with help from Alex Bermudez, would but in quick and consistent laps while Bravo struggled in traffic. When Bravo finally made his last stop four laps later, he would be over six seconds astern of his one-time ally, the pair finishing 9th and 13th respectively.

Things were less chaotic at the sharp end, as Hays led Morales and Downs into the waning laps, the three mostly content to work together until their final stops had happened. Morales would again be the first to blink, coming in on lap 55, with Hays following suit the very next lap. This time however, Morales put together a much better stop, and although Hays was again faster, the advantage wasn’t enough for Hays to get a safe blend done, and had to fall in behind Morales upon exiting. This left only Downs to pit, and he would do so on the white flag lap, but lost too much time to be threat for the win, and had to settle for third.

This left it to just Morales and Hays in the final lap; plus some traffic… 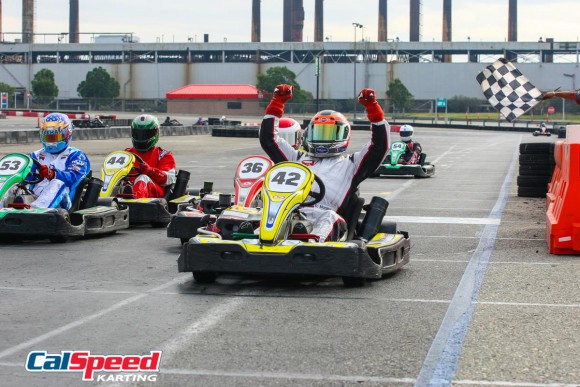 Starting the final lap, the leaders would close in on a Jason Collins and Patrick OKeefe, who were battling to stay on the lead lap; a good goal since being on the lead lap (or first driver 1 lap down) means you were eligible for the invert the following round. Essentially, it was a battle for pole position for the next round, while simultaneously it was a fight for the win that was trying to come through. Being the leader and hoping to put this traffic between himself and his foe, Morales dove to the inside in Sportivo, and after some pretty good side to side contact, dispatched Collins, putting him between himself and Hays. In a battle of his own, Collins showed Morales how little a fan he was of the move the very next corner, and gave a bit of contact back to Morales, which saw Hays take advantage and get to the leaders back bumper. With all drivers continuing with virtually nothing lost, it would end in a side by side run down to the final corner, with Morales running Hays really tight to the apex. It was hard racing, but room was given by both parties on entry and exit, with Morales coming across f for the win, Hays second, and Collins home the first driver one lap down. Downs slotted in a few lengths back in third.
It was an exciting finish to what was an interestingly different looking IronMan race than what has been seen in recent memory: six different leaders showed just how competitive it was, and the last lap-last corner dual was just icing on the cake. Round two on Tecnico is already sold out, and with a few big names absent from the list, the twists in this season are just beginning… 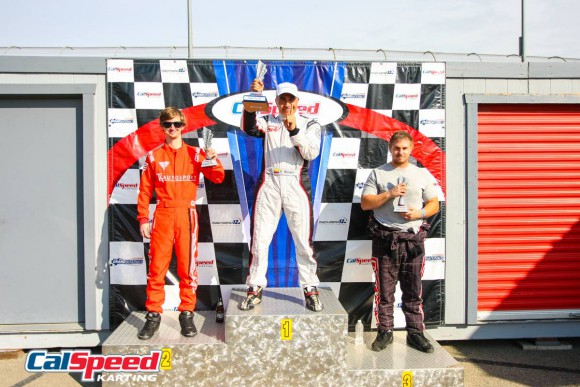