CSK Racing Owns the Top Step in Tri-C Karters Round #4!

Like they did to start off the new year, CSK Racing would bring home another hat-trick of victories to close out the first half of the Tri-C Karters season this past Saturday. Like the aforementioned season opener, it was again on the Sportivo layout, but this time with warm temperatures and no sign of rain… 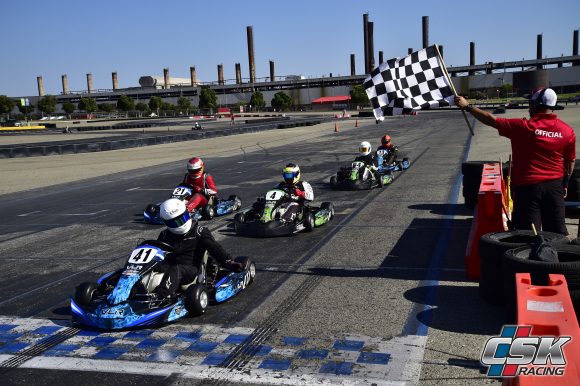 Once again it was point leader Mark Connell showing the way after the green-white-checkered qualifying, earning his second pole in a row and of the season. In the first heat race it would #2 qualifier Adam Nagao picking up where he left off in his debut round in April, finding his way by to score the win. Connell was not to be denied a heat win however, and claimed the second 8 lap heat race for his own. Throughout both heat races, the lap times were closer than ever for the Spec class, with fastest lap times clocked by Lukas Dziemidok and TJ Blackledge. It was all to play for in the final…

The pole side would not get a very good start in the 16 lap main, dropping Connell back to fourth, with TJ Blackledge snagging the lead from the off-pole position via his heat two finish. From then on it was round #3 winner Blackledge at the helm, leading a train of karts that included Nagao, Connell, Dziemidok and Sean Bradley. There was plenty of jostling for position as Connell worked his way back up to P2, with Dziemidok following him through during his pass on Nagao. In the waning laps however, it was Blackledge holding on for his second win in a row, with Connell bring home the most points on the day, and Dziemidok earning his first class podium. Nagao would settle for 4th, while Bradley rounded out the top five, bringing home the 5 bonus points for fastest lap. 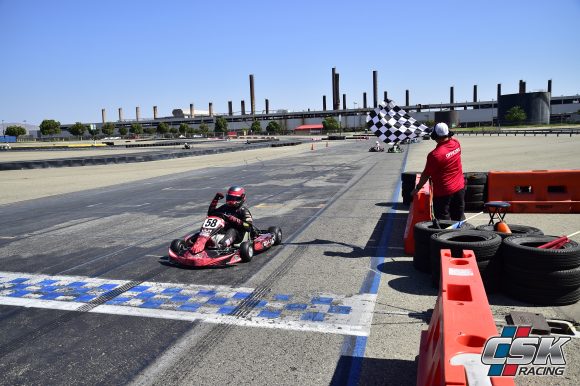 While the eventual track conditions would prove to be fairly warm, the morning warm up and qualifying sessions took place under overcast skies and cooler temps, throwing a wrench at many of the Senior 206 competitors. CSK Racing Team Manager Mike Smith was able to steal away the pole position in those conditions, going 1-2 with teammate Derek Esquibel. In the first heat race it was Smith leading straight away, the field would immediately have to deal with traffic on lap one. Running with the faster World Formula group for their heat races, the 206 senior leaders had to contest with a non-class driver during the whole race, who eventually broke up the leaders in the fight for the win. Esquibel would come out on top however, with Smith settling for 3rd. The second heat would be a smoother affair for the CSK racing teammates, as both of them got linked up early and were able to pull away to a comfortable lead over stablemates Jetson Lieser and Jake Hood in third and fourth respectively.

In the Main Esquibel would again have things go his way, squirting out to an early lead, one that would be bolstered by the infighting that happened behind him. The group of Smith Lieser, Hood and Zeller would fight for most of the first half of the race, each looking to be the leader of the pack. In the end it was Smith and Hood linking up to help gap themselves from the rest, completing a 1-2-3 for CSK Racing. It was Esquibel’s second win on Sportivo this year, enough to put him back into the point lead heading into the second half of the season. 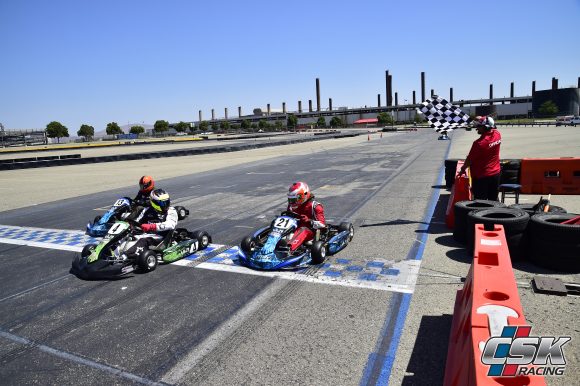 Masters 206 would see the usual suspects at the sharp end, kicking things off with CSK Racing sweeping the top five spots in qualifying. Point leader Mike Smith would lead the field away at the green after earning the pole position, but would immediately get pressure from 2017 champ Mark Connell, and up and coming talent Lukas Dziemidok. The trio would stay that way for the duration, maintaining even gaps from start to finish. In heat race two it would again by Smith leading through the opening corners, but this time Dziemidok would follow through for second in turn four. The up-tick in position was over as soon as it started however, with Connell doing the over-under to steal second right back. That short bit of infighting was enough for Smith to snag a small advantage, and the lead trio mirrored their race from before.

In the Main things looked to go the same way as before, with Smith jumping out to a small advantage, with Mark and Lukas giving chase only a few kart lengths astern. While Connell would again pull out an advantage on 3rd on back, this time they would reel him in, with Dziemidok taking over second, and round #3 podium finisher Sean Bradley joining the fight. This all but sealed the deal for leader Smith, who would go on to take the win, and earn his second perfect day in the class. Behind him however was where the real action was, with all three drivers drag racing to the finish. Connell would steal back second over Dziemidok and Bradley, the three across the line at the same time and separated by just .070 seconds…

CSK Racing would like to again thank all of their customers for coming out to round #4 for the 2018 Tri-C Karters season, and we’re looking forward to round #5 on the Grande CCW configuration on July 28th. Want to get in on the fun? Hit us up to get on track in one of our rental packages, or inquire about how you can get coaching from some of the best in the 206 business. And remember, CSK Racing offers VLR kart and part sales trackside at CalSpeed Karting, so feel free to hit us up for all your VLR needs!