The start to the second half of the 2018 Tri-C Karters season was this past Saturday, with the CSK Racing team looking to find success on the Grande Counter Clockwise layout at CalSpeed for the second time this year. With four rounds down and four to go, the points standings are starting to become a talking point, and with CSK Racing owning the point lead in all three categories, round #5 was a chance to add to that margin… 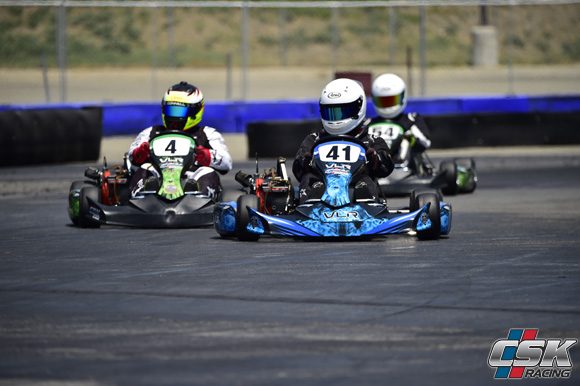 In just his third 206 race, CSK Racing newcomer Adam Nagao was the first to make some noise in the VLR Spec class, earning his first pole position in convincing fashion over a very close field of drivers. In the heat races however it would be the veteran and current class point leader Mark Connell sweeping the top spot, leading almost the whole way in heat 1, while biding his time for a late race move to snag heat two. His primary title rival TJ Blackledge would also be his closest competition, with the young driver earning runner-up honors in both 8 lap contests.
In the Main event, it would be Connell leading the way from the start, with Blackledge and the aforementioned Nagao again right on his heels. This time it was TJ waiting to make the move, doing so just before halfway, with Connell slotting into the hunter role. He stayed there patiently until the penultimate lap, stealing away the lead, and holding off the counter-attack. On the final lap, Connell kept things tight, but TJ was able to find just enough room for the move in hairpin, the two going wide in the process. Things got interesting at this point, as Lukas Dziemidok was able to close the gap and actually overtake Mark for second, with the latter priming up for his own offensive in the last complex of the track. While the move was made, Lukas and he tried to occupy the same space, smoke coming off the tires from contact. In the end, it was TJ Blackledge scoring his second win in a row, with Lukas Dziemidok earning his best finish of second, and Mark Connell settling for third. 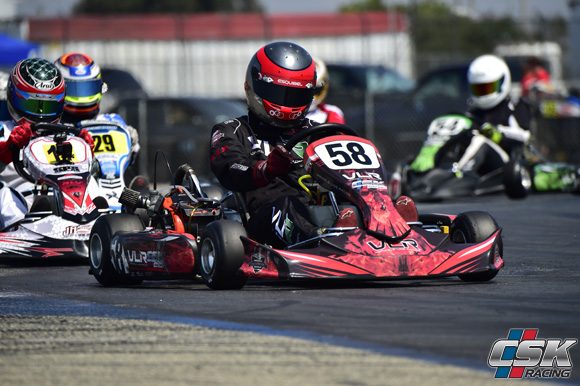 With the Lo-Pro Money Race later that day, the Senior class got a little bump in entries, and talent level for the 5th round in the championship, but CSK Racing was still able to fight at the sharp end all day. They would kick things off with Team Manager Mike Smith earning his 3rd pole of the year, while point leader Derek Esquibel clocked the 3rd best time, split by their VLR factory teammate David Vasquez. In the first heat, Smith and Vasquez would lead the way after their own little tussle, before Smith fell to third in the later stages after some hard racing. In the second heat race, it was more of the same, the tone being set for a very exciting finish to the heat races. Having slipped to fourth, the last lap of heat two saw Smith make a slide job move for third in the hairpin, before capitalizing on the battling duo in front. Making it three wide up the hill, he narrowly was able to clear the group to go from 4th to 1st in two corners, stealing away the heat race win. Unfortunately, Esquibel’s heats didn’t go as planned, and after a hard fought 5th in heat 1, contact resulting in a flat tire took him out of heat two.
In the main the real charge came from Esquibel, as the championship leader looked to salvage points after his bad luck, surging all the way up to finish 5th at the line. That would be the best finish for CSK Racing in the Senior category, as Smith slipped back from the lead after a bad decision on air pressures. 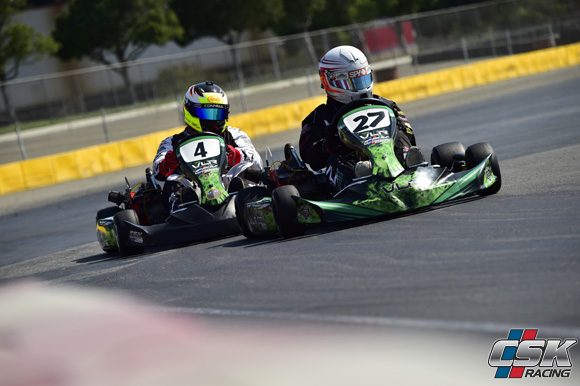 While the pace amongst the front-runners has been close all season in the Masters 206 class, round #5 saw things get even tighter. Mike Smith would earn the pole position to start the day, with his season-long rival Mark Connell clocking the second best time to line up P2. The start of that first heat race would go to Connell however, with Smith having to fight back from 4th after the outside row got the jump. While Smith did get back to the lead, Connell kept the pressure on, coming just .07s seconds short of the win at the line. Heat two saw Smith cross the line with a little more advantage, but this was only after Connell ‘bicycled’ coming out of Long Beach, forcing him to lose touch with a few laps to go.

In the Main it was again Smith and Connell leading the way, then Connell keeping the pressure on well past the halfway mark. Shortly after clocking the fastest lap of the race, a small bobble in the Silk corner allowed a tiny advantage for Smith, one he was able to hold on to until the end. Connell settled for second but showed that the gap to the point leader was now all but gone.

Elsewhere in the class, the fight for third in the championship grew even closer with Lukas Dziemidok scoring his second podium in a row in the class, while Jose da Silva bounced back to claim fourth, with Sean Bradley coming across 5th. After the results, there are just 4 points separating three drivers in the battle for third, with just three events remaining…

CSK Racing would like to again thank all of their customers for coming out to round #5 for the 2018 Tri-C Karters season, and we’re looking forward to round #6 on the Classico configuration on September 1st. Want to get in on the fun? Hit us up to get on track in one of our rental packages, or inquire about how you can get coaching from some of the best in the 206 business. And remember, CSK racing offers VLR kart and part sales trackside at CalSpeed Karting, so feel free to contact us for all your VLR needs!