The 2018 Tri-C Karters season kicked things off this past Saturday in some of the toughest conditions ever for the club. The day would start out dry, but as the morning warm up sessions finished, the track would get too wet for slick tires, and rain tires were adopted for qualifying. The track would dry out as the heat races progressed however, with some drivers gambling on an early switch, and all classes finally on dry tires through about halfway through the mains. The rain would come in earnest about halfway through those main races though, with the latter half drenched in a constant downpour, which continued through teardown at the end of the day.

CSK Racing would have 15 drivers across three 206 classes that would brave the elements for the season opener, and when the checkers finally fell it would be a hat-trick result with wins in each category entered… 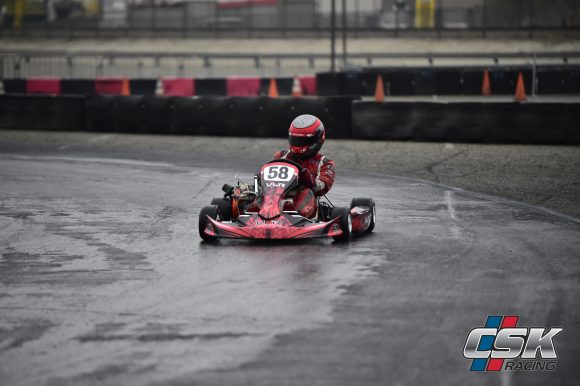 For the first race of the season, three drivers would be entered into the Senior 206 class for CSK Racing; last year’s champion Mike Smith, 3rd place in 2017 Derek Esquibel, and regular front runner Jake Hood. Hood would not be on a VLR for the Senior class however, restricting his sole Emerald chassis for the Spec category.

Very few drivers under the CSK Racing tent had any rain experience coming into the day’s event, although the three drivers entered into the Senior category shared most of it. Team Manager Mike Smith boasted the most rain history of the three, putting several events under his belt when he lived in the Pacific Northwest. The group’s leg up in experience showed in Senior qualifying, as Smith brought home the pole position by 1.295 seconds over Hood and Esquibel, starting the day with a 1,2,3.

Esquibel would find his way past Hood in the early goings of the first heat, catching Smith by the end with the two drag racing to the line with Smith winning by just .035 seconds. Heat two would again see the CSK Racing teammates leave the rest of the field, with again Smith coming away on top, although the speed of Esquibel was undeniable.

In the Main it would be Derek getting the jump at the start and never looking back, dominating the 16 lap race out front while Smith battled for second. For Derek it was his second 206 win, and second win on the Sportivo layout, backing up his win from the summer race here in 2017, while snagging fast lap honors in the process. Smith would be forced to settle for 4th in the end, sliding out in the final corner to lose the second spot on the podium. Still, it was a solid day, and Esquibel and Smith sit 1-2 in the points after round #1.

As was mentioned before, Mike Smith had the most experience in the wet under the team tent coming into the day, but many of his CSK Racing teammates showed extremely well for their first foray on the slick stuff. Smith would score the pole position by 2 seconds over teammate and 2017 Masters champ Mark Connell, with 2017 Silver Fox Challenge winner Rob Brackett rounding out the top three. Unfortunately, contact between Connell and Smith at the start of the first heat would see Connell spin and get collected in an incident, inciting a stellar driver from the back the rest of the day. Connell would end up finishing 4th when the checkers fell on the final.

One driver raising some eyebrows in the class was rookie driver Lukas Dziemidok, qualifying 6th out of the 17 in class, and then backing it up with strong performances in the heat races. Smith would win heat one with Lukas coming home third, even leading at one point. In the second heat race Smith gambled on slicks while nearly the entire field was on wets, and the back and forth at the front was intense. Smith would eventually settle for 2nd, with another new CSK Racing driver making some noise; Michael Middleton. A former TAG racer, Middleton steadily improved on his new VLR 206 package, working up from 12th in the first heat to an impressive 4th in heat two.

The Master 206 Main would be the final one of the day, and the one in the worst conditions, with a complete downpour creating standing water all around the track. As engines struggled to stay running under the onslaught of unburnable liquid, drivers negotiated the puddles and rivers as best they could. Smith would return to the front in the early going, maintaining the top spot until the final few laps, where he battled back and forth for the win, eventually capitalizing on an opportunity to bring home the victory. The aforementioned Connell continued his phenomenal recovery drive, backing up his run from 15th to 10 in the second heat, with a run to 4th in the Main. Michael Middleton would back up his heat race pace to round out the top 5, with CSK drivers again looking strong in the Masters point standings. 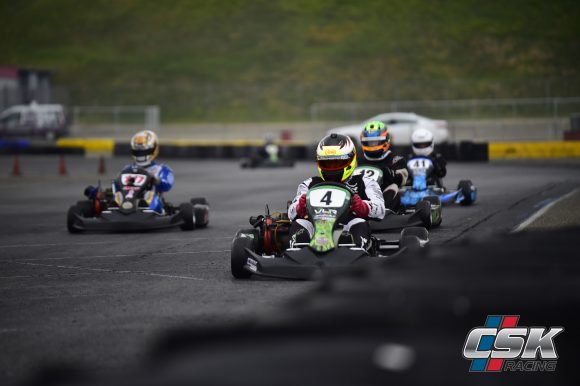 Over the off season the number of VLR chassis have grown tremendously, and the VLR Spec 206 class is looking to have some serious growth here in 2018. The rain did keep a few people away, but there were still many who took to the track in the one-make class. And the one they were all chasing after qualifying, was none other than the 2017 Spec Champion himself Jake Hood, bringing home the first pole position of the season by nearly a full second over fellow CSK Racing teammates Rob Brackett and Jon Kimbrell.

Once the racing got underway however it was 2017 title contender Mark Connell that found some extra pace, working up from 4th to take over the top spot in the first heat over Hood in second, and Brackett in third. The skies would start to open up a bit towards the end of heat two, and where it once looked like Connell would again walk away with the win, he would be caught by both Jon Kimbrell and Jake Hood. The trio would fight it out in the final couple of laps, with Kimbrell stealing away the win, and Hood demoting Connell to third.

The final race for the VLR Spec Class would see the rain truly come down, soaking the competitors and making full-wet setups the norm. Unfortunately, the sheer amount of water on track would play havoc with several competitors engines, with a few waterlogged packages not making it to the end. Not just making it to the end, Mark Connell put on a clinic in the full wet, not looking at all like this was his first ever rain race by walking out to a massive 24+ second advantage, bringing home the first Spec class win of the year, with Jake Hood finishing a comfortable second.

CSK Racing would like to again thank all of their customers for braving the elements and coming out to the season opener, as well as congratulate all of our drivers for their success in round #1. We’re looking forward to round #2 on the Grande CCW configuration on April 7th, just a little over 3 weeks from now. Want to get in on the fun? Hit us up to get on track in one of our rental packages, or inquire about how you can get coaching from some of the best in the 206 business. And remember, CSK Racing offers VLR kart and part sales trackside at CalSpeed Karting, so feel free to hit us up for all your VLR needs! You can also view our full photo gallery of the event at this link here. For the race results, head on over to MyLaps.