CSK Racing Closes Out 2018 with Championships Across the Board…

The Tecnico circuit would play host to the 2018 Tri-C Karters Season Finale, and with titles and hardware positions on the line, it was an exciting day from start to finish. CSK Racing had already locked in several podium spots and even a championship heading into the event, but there was still much to play for in the final race of the season, with plenty of bragging rights to go along with the results. And with the awards banquet immediately following the event as well, competitors did not have long to wait to hoist up their 2018 spoils… 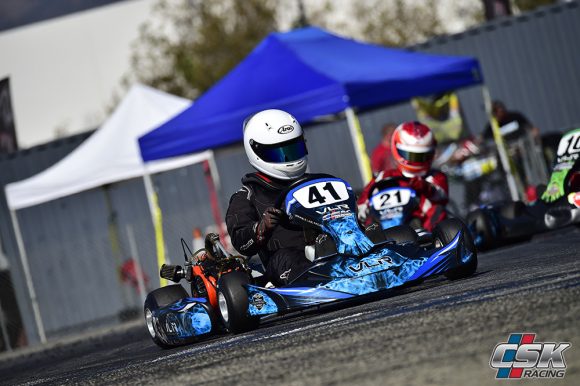 A new face would kick things off at the front, as Jose da Silva scored his first career pole position by beating out CSK Racing stablemate Adam Nagao by just .04 seconds in the green-white-checkered qualifying. Heat one would see Jose lead from the get-go, with Nagao slotting into second, while point leader Mark Connell would get pushed wide in the turn one melee. Aside from the early entanglements, the front-runners held station for much of the race, until about two to go when Nagao stole away the top spot, and the eventual heat one win. For his part, Connell charged back towards the front, albeit settling for a sixth and the fast lap of the race. Heat two would again see Da Silva lead the opening lap -this time from the outside of front row- but the driver going to the front was Lukas Dziemidok. Lukas would find the front after just a pair of circuits, holding on for his first heat race win of the year, while Jose had to settle for second for the second time. Title contenders TJ Blackledge and Mark Connell would slot into 3rd and 4th respectively, while heat one winner Nagao would fall to 5th at the checkers.

Dziemidok would lead things away at the start of the 16-lap Main, but it would be Blackledge taking over the top spot after the opening few laps, with Connell slotting into third. This lead trio would break away from the rest of the pack, with the top two eventually splitting away for a two-horse race. When the checkers finally fell it was an incredible 5th win on the year for the young Blackledge, with Dziemidok crossing the line second for his fifth podium of the year. But earning his 6th podium -and with it- the 2018 VLR Spec Championship was Mark Connell, besting his third overall from last year. 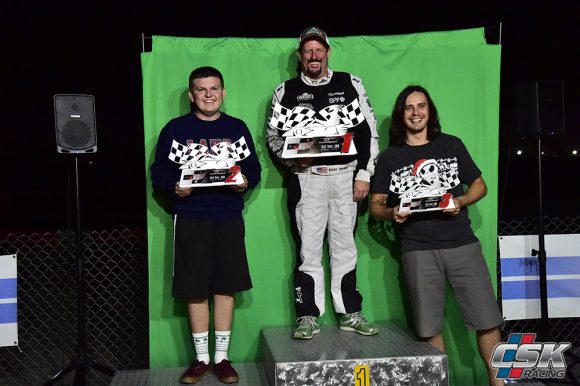 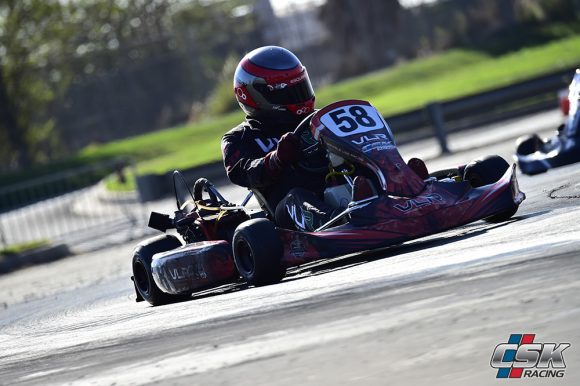 Of the three 206 classes CSK Racing entered, it was the Senior category that would be the nail-biter on the day; it all came down to the final laps in the main before it was decided. CSK Racing’s Derek Esquibel entered with a mere seven-point lead after the bad luck from the previous round, a lead cut back to two points after missing the pole position to his title rival in qualifying. Bouncing back in the first heat race, Esquibel would link up with stablemate Adam Nagao in the opening circuits, going 1-2 for the first half of the eight-lap race. When the checkers fell on heat one it was Derek earning his 9th heat race win on the season, and with it, lengthening his lead in the points back out to 12. Heat race two would see Derek again at the front, this time linked up with fellow VLR team driver and 2018 KPX Senior champion David Vasquez, the duo eventually cruising to a 1-2 at the line, albeit with Vasquez snagging the heat two victory. Critically, Esquibel’s lead grew by another 21 markers, as title rival KC Cook would have an unfortunate DNF after a mechanical issue.
For the main the goal for Derek was clear: stay towards the front, and be sure to finish; a top three finish would secure him the title no matter what happened, even if Cook won with fastest lap. For nearly the entire Main event it would be Vasquez leading Esquibel; the latter comfortable in his pushing position until just a couple of laps to go. However, his rival had made it up to the front group over the course of those 14 laps, making the final pair of circuits a dogfight. When the dust all settled, Derek Esquibel not only claimed his 5th podium of the year, but also the 2018 206 Senior Championship in the process. Adding to the CSK Racing success, Team Principal Mike Smith was able to hold on for 3rd in the class as well, making it a 1-3 for the team in the category for the second year in a row. 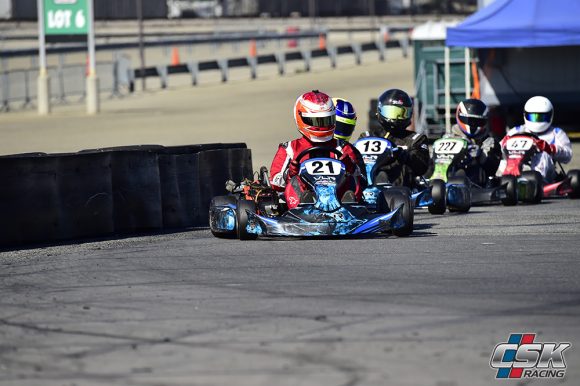 With both Mike Smith and Mark Connell locking in the top two spots in the points in round seven, each decided to sit out the finale, and it gave a bit of a glimpse of what we could expect to see in the 2019 season. Showing he would be the immediate one to watch, Lukas Dziemidok added 5 bonus points to his bid for 3rd overall in the standings, scoring his second pole position on the year. Filling out the front row would be 2017 TAG Masters champ Roy Steele, who was looking his best ever in the 206 package that weekend. In the first heat race, however, it was Jose da Silva making good on his solid speed, moving up from third at the start to bring home the win, with Lukas settling for second by just .051 seconds at the line. Heat #2 would see Dziemidok on the attack and getting to the front right away, but again coming under fire from his rivals. Once again it was da Silva putting on the heavy pressure, making his way past for the lead at about the halfway point, but this time Sean Bradley also came into the mix. Having clocked the fastest lap in heat one, Bradley took the fight to Lukas, dropping the pole sitter down to third when the checkers fell. In the Main event, it would be the double heat race winner leading away from the front, as Jose da Silva looked to make it a sweep on the day. Behind him applying the pressure would be his day-long rival Lukas Dziemidok, while Sean Bradley slotted into third at the start. It was a train about five drivers long in the opening laps, but then on lap six, the fighting began, allowing the top two to split away, while third on back battled for position. Dziemidok would make the move on that same lap, and with Da Silva pushing him, the duo pulled away from the infighting, where Roy Steele would come out on top. For Steele, it would be his first podium of the year, but too far back to challenge for the win. Up front, Lukas would find just a little bit more and hold on for his first career win, and with it, the third spot in the Masters Standings. For his part, Jose would score enough points on the day to snag the top spot in the G50 Grand Masters subcategory as well, capping off an excellent rookie year for the duo. 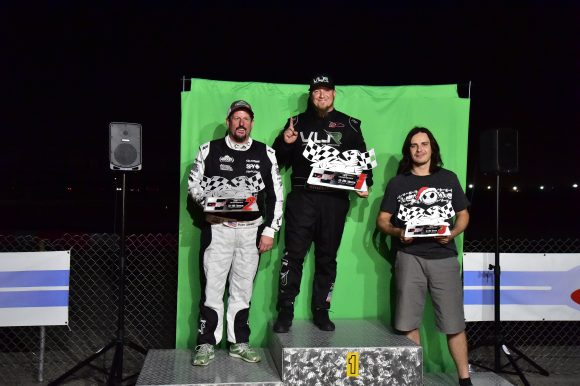 CSK Racing would like to again thank all of their customers for coming out to round #8, and the entirety of the 2018 Tri-C Karters season. The second year for the team has been an exciting and successful one, and we are looking forward to doing it again in 2019!

Want to get in on the fun? Hit us up to get on track in one of our rental packages, or inquire about how you can get coaching from some of the best in the 206 business here in the off-season. Want to own your own VLR or get an exclusive ride for the 2019 season? Inquire with us about our lease options, or used team karts for sale. And remember, CSK Racing offers VLR kart and part sales trackside at CalSpeed Karting, so feel free to contact us for all your VLR needs!