The third round in the 2017 Tri-C Karters season was this past weekend, taking to tricky on-track conditions, followed by a bit of wind in the afternoon. The Grande Counter-Clockwise configuration would be in place for the event, with CSK Racing fielding 11 drivers across 4 classes, including 7 in Spec VLR 206, 3 in 206 Senior, 1 in Juniors with a pair of double duty entries in Masters. 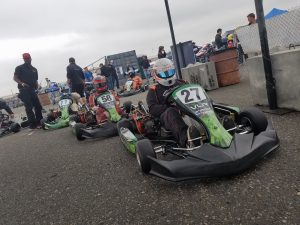 The day would start with a CSK Racing driver at the top as Mike Smith would score pole position in tricky conditions, as the circuit was still slick from the morning rain. Smith would back up the top qualifying spot with a pair of heat race wins, while teammate Derek Esquibel worked up from a 9th qualy spot to a pair of 4ths and fast lap in the 2nd heat race. New under the CSK Racing tent was Jake Hood, needing to bounce back from not only a tough qualifying session, but an incident that took him out of the first heat race. Bounce back he did however, working up from last to finish inside the top ten in the second heat race. He wasn’t done there though, passing five more karts to finish 5th overall in the main, his best finish of the season.

At the front both Smith and Esquibel had a shot at the win, with Smith getting shuffled back after leading early, while Esquibel picked up the top spot heading into the final couple of laps. About halfway through the penultimate lap it was Esquibel leading, with Smith 4th, but contact in the hairpin while being passed saw the top three go wide, and Smith go from 4th to 1st in a single corner. Esquibel would cross the line 3rd, but would be promoted to 2nd after scales to make it CSK Racing’s first 1-2 finish in the class. Smith, Esquibel and Hood sit 2nd, 3rd, and 4th respectively in the current point standings. 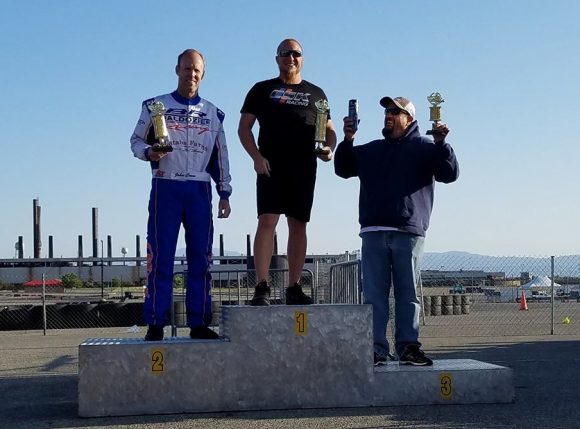 Round two’s lone Masters entry Mark Connell would be joined by Team Manager Mike Smith last Saturday, and the duo would be a mainstay at the sharp end all day. Smith would pick up pole position in morning qualifying, followed by a pair of heat race wins; while Connell clocked the 2nd fastest lap time, battling with legendary Masters driver John Crow for the second spot in both heat races, settling for a pair of 3rds. When the Main rolled around it was again Smith at the front and Connell slotting into the second spot, with the latter nursing sore ribs to boot. Connell would stick with Crow for the opening half of the race or so, but in the end would finish third for his 2nd class podium in a row.

While Smith would pull away for an initial lead, Crow would slowly reel him in, and the sidelines were rewarded with a battle for the win that last several laps. Experience in the 206 karts looked to favor Smith, and he was able to hold off Crow for the win in his Tri-C Karters Masters class debut. 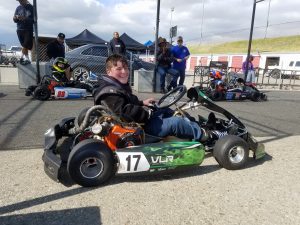 Brand new to the 206 game after moving up from arrive and drive karts, young Daniel Eaton made his debut in the 206 Junior class after putting his first laps in the day before. It was a day of learning and constant improvement for Eaton, shaving seconds off of his lap time through out the event, working his way to a 4th place finish in both the second heat race, and then the Main. As a driver brand new to the package, this new VLR owner will be sure to improve as he returns to practice at CalSpeed. 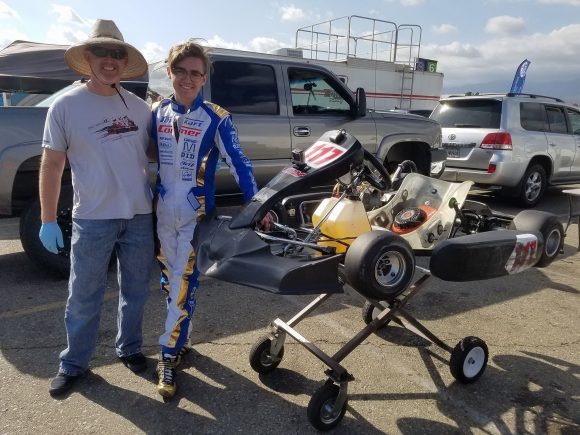 Things started off strong for the CSK Racing team in the form of two drivers inside the top 5 in qualifying, as point leader Mark Connell was fourth, and newcomer to the team Jake Hood qualified 3rd. Unfortunately for Hood, an incident in the first Senior heat race would find him late to the grid, the good news being the team was able to get his kart put back together in time to at least start last. Connell would assume the top spot from the get go in the first heat, leading flag to flag for the win, while Hood sliced through the field to make it up to an incredible 4th by the checkers. Heat two would see the continued rise of Hood, as he made his way to the top step to bring home the win and the fastest lap in the process, with Connell coming home 2nd.

In the Main there was no catching Jake Hood. He would lead nearly flag-to-flag and clock the fastest lap of the race, dominating the 3rd round for a fantastic comeback after starting last in the first heat race, and his first win of the season. Behind him Mark Connell would play things smart behind Logan Calvin for the first half of the race, moving into the second spot about halfway through. He and Calvin would stay nose to tail without threat from 4th, with Calvin leaving his strike until the final lap. While Calvin would take over the 2nd spot earlier in the lap, it wasn’t until the final complex that the final podium order would be decided. Countering a defensive move, Connell swung wide to over-under his opponent, stealing back the 2nd spot for his second runner up spot in as many races.

As an honorable mention, Dennis Kimbrell backed up his 5th from last round with a 4th here in round #4, the multi-time Super Series Grand Masters champion showing he hasn’t lost anything with the move to the VLR 206. Well Done Dennis! 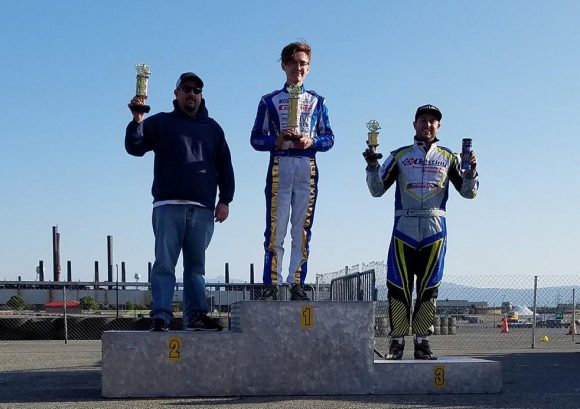