Round #2 for the Tri-C Karters at CalSpeed Karting finished up this past weekend, with the Tecnico layout providing the stage for the second race of the year, and growing numbers in all LO206 classes. CSK Racing would see 13 total drivers under its tent with some drivers doing double duty, totaling 10 entries in VLR Spec, 5 in Senior, and 1 in Masters. 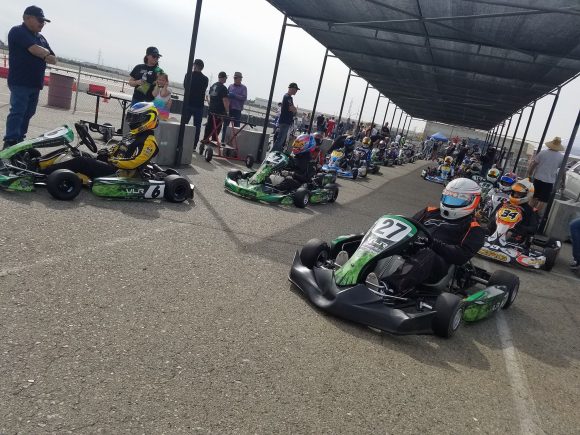 Derek Esquibel and Mike Smith returned to lead the CSK Racing team in Senior 206, the duo going 1-2 in the practice session ahead of the 22 entries in class. While they backed up their pace in qualifying, a few others found a little more and it would be a 6-7 Q effort at the end of the session. After missing round #1, Luca Bortone made his 206 debut with a 12th in qualy, while Marcin Balazy (10th) and Aaron Downs (5th) did double duty, also running VLR Spec.

The heat races would go to Smith, working up from 7th to take the win on the final lap of the first heat race, and then taking the second heat win after the rest of the pack was held up n traffic. For the rest of the CSK Racing squad, it was a bit of a hot/cold experience; Esquibel fought in the top 10 pack in both heats, and would line up 9th for the main, while Downs would get dinged in tech for not having the proper Briggs and Stratton labeled spark plug, and Balazy would be involved in a turn 1 incident that took him out for the day. For his part, Bortone brought things home in 9th and 14th and would be set for a top ten run in the main.

The Main would again see a mix bag, as Bortone was involved in a lap one incident that took him out of the running, the ensuing red-flag from the incident bringing a single file restart. The 15 lap run to the finish saw Downs work up from 20th on the grid to a solid 13th place finish, while Esquibel came home 6th after a hard fought battle from just inside the top 10. Out front it was Smith leading much of the way, eventually settling for 3rd after being one of the top runners on the day.

After two rounds, Smith sits 2nd in points while Esquibel’s recovery from round #1 sees him move up to the 4th position with six rounds yet to run. 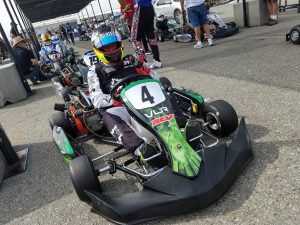 The lone entry into the Masters category for the CSK Racing team, Mark Connell mimicked his pace in the Spec category-utilizing the exact same setup-putting his VLR chassis on pole, and then backed it up with a pair of heat race wins ahead of 14 drivers. Leading for the better part of half the race, Connell would get passed with a handful of laps remaining, holding on to finish right on the back bumper of the leader for a solid 2nd place in his first run in the class. 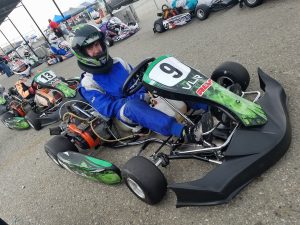 A total of 10 drivers from CSK Racing would enter the VLR Spec class, which grew by a pair of entries for round #2 to include 18 total drivers. This included Auto Club Speedway’s president Dave Allen, out having with the team, while also promoting the upcoming NASCAR race on March 24-26. While not a regular behind the wheel of a kart, Allen’s respective showing made him optimistic for what a second go-round could produce.

Overall, the aforementioned Connell and Downs would top the charts in qualifying, going 1-2 respectively in qualifying, separated by just .017 seconds. Connell would lead all under the tent for the class, competing for he win in both heat races and the main, with Downs also showing his competiveness throughout the day as well; battling back from a tough day in tech.

In the main it was again a close fought run up and down the field, as a train of about six drivers battling it out; which included the one-off entry and former TAG racer Trevor Buongiorno. Buongiorno had improved little by little as the day progressed, and in the main was right on the heels of the top 5, capitalizing when there was contact on the final lap. With a penalty on from said contact, as well as dings in tech afterward for safety wire, Trevor went from finish 4th to bringing home the win in his first start in VLR Spec. He would be joined by his CSK Racing stable mate Mark Connell on the podium, who now leads the points after 2 of 8 events.