CalSpeed Karting was able to squeeze in the second round of racing last month, after overnight rain saw the clinic cancelled in the morning. After taking to a (mostly) dry track, a myriad of pit strategies ensued, with the early single pit being the way to go shown off by Taylor Hays and Adam Nagao. Hays would only lead one lap, but it would be the most important, passing Nagao on the final lap to score his 4th career IronMan win. Alyssa Yauney would best Diego Morales in the closing stages for the final podium spot, Morales having led the most laps in the race.

Round #3 of the IronMan will see the field of 30 switch directions for the first time in 2017, as Tecnico’s counter clockwise layout provides new challenges for the drivers. This track has been dominated by one driver over the past year, as Adam Nagao looks to go for three in a row. Will he get the hat trick or will we see a new driver atop the box tomorrow? 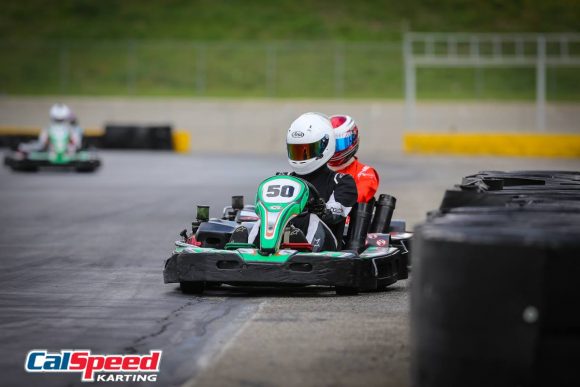 First run as a new layout in the 2014 Sport Kart Grand Nationals, the CCW direction Tecnico layout immediately became a driver favorite, albeit also one of the most challenging circuits at CalSpeed. Starting off the lap heading into the Esses peaks the excitement, and the full throttle run through the carousel dumps onto a very short back straight before coming up on the hairpin. While a great passing zone, the hairpin echoes the challenges from the similar ‘Monaco’ hairpin seen on Sportivo last month, as not getting the pass completed will have a driver stuck on the outside through the sweeper. This flat out double apex right hander builds the speed up and into a short chute before drivers tackle the quick right-left of the Tecnico complex, another tough task in putting together a consistent lap. It is also one of the most fun parts of any track here at CalSpeed, and getting it right will see a possible passing opportunity up the hill into the Kornakurva corner. This decreasing radius corner is arguably the number one passing zone for many drivers, but right after it is the final challenge-‘Bypass’-a complex that has drawn the ire of many drivers over the last few years. An off-camber, off-surface corner, Bypass is tricky going through it alone, but with the corner that precedes it two and sometimes, astonishingly three-wide can be seen. This is also the final complex on the track, and last lap moves are commonplace. Knowing how to get that done without issue is a must for any driver.

For this weekend we have 20 returning drivers from round #2-16 of which eligible for the invert-putting the winner from last month smack-dab in the middle of the 30 kart field. He’ll have good company though, as Hays lines up just behind the guy who swept both races at Tecnico last year: Adam Nagao. Nagao has proven he is the guy to beat on this layout, and the current point leader will again be the one to beat tomorrow. One of just two drivers to have led laps in both races so far, he is heading into the third round with a lot of momentum, and with endurance racing teammate Hays right behind these two will be looking for a repeat of round two. Alyssa Yauney also starts with the duo, last month’s third place finisher having also found the podium in the fall race here, admittedly one of her favorite tracks. Lets also keep an eye on Sean Fite starting in P8; the only driver besides Nagao to lead laps in both races so far, Fite has consistently made the most of his season so far, making sure that he snags maximum points in the first two rounds by getting to the front for the bonus. Third time could be the charm for Fite here in 2017.

At the sharp end of the field, Chris Carter will be leading everyone to the green, and given the way he has been racing so far this year, watch out for a possible career performance from this veteran driver. Just two spots behind him is fellow Masters standout Jose da Silva, who has picked up some extra seat time of late, and is in the same boat for a big run tomorrow. With veteran experience at both the front, and the middle of the field, the next question is what will we see from the 10 drivers new since last round. Well that spotlight is going to go firmly on a couple individuals, Cameron Jocelyn and Ryan Curtin. This is a one off fly-in race for the latter, as Curtin takes the trip from Atlanta for this weekend’s event, a prior front runner in the Super Series and Sport Kart Grands. In Jocelyn you have someone who arguably has more laps around CalSpeed than anyone else, albeit not on this track configuration. The former mechanic and tester for the facility, he will certainly put on a show as he looks to come from the the depths of the grid. 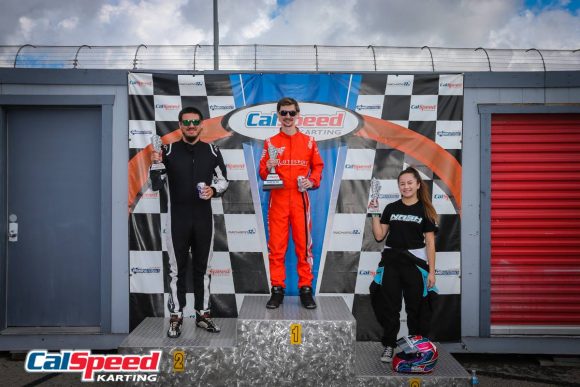