Last month’s round #9 on Grande CCW saw Alyssa Yauney tie the record for most wins in a season with her third, having to best fellow Summer Series title rival Taylor Hays in the process. Hays would settle for second with Sean Fite completing the podium, while Adam Nagao cinched up the Overall championship with a sixth place finish.

Tomorrow the 2017 IronMan Series will end on the Grande circuit, running in the standard clockwise direction for the second time this season. This time around the track is a bit different from when the series visited it in the Spring for round #4, as the circuit was fairly bumpy the first time around. Now a lot smoother, the Grande circuit will play the backdrop for what is sure to be an exciting battle for the Summer Series title, as well as one last shot to snag an IronMan Series victory before the year is out. Still others are looking to polish up their endurance craft prior to the Machismo 12 Hour a little over a month away, making this event one of the most anticipated yet. In the final preview we take a closer look at the Grande configuration, the battle for the final championship up for grabs, as well as have a quick chat with the -now 2-time- IronMan Series champion, Adam Nagao. 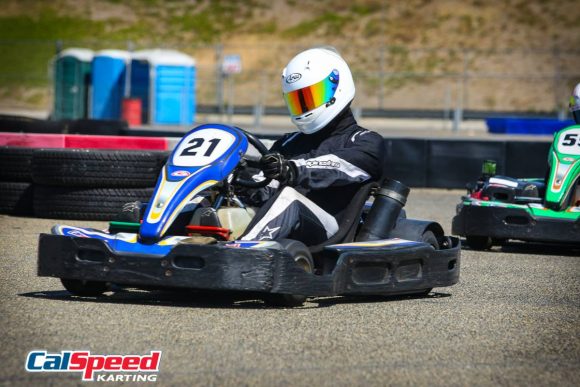 Last month Adam Nagao was able to clinch his second IronMan Series championship, going back-to-back with his first title last season. I caught up with the newly crowned champ before this weekend’s event to ask him a little about this past year’s season, as well as get some insight on his plans for the 2018 campaign. Take a look!

Mike Smith: Adam, you are the back to back IronMan Series Champion. Congratulations!

Adam Nagao: Thanks Mike! It was a hard season, but I’m happy to say I pulled it off!

MS: Ironically, you actually were able to clinch on a day where you actually had your worst finish of the season -a sixth. Tell us a little about that race from your point of view.

AN: Well, I knew that if I could keep Taylor from leading the most laps and winning then I would clinch. So I made sure to push as hard as I could to get to Taylor, once I caught up to him I made it a point to send it every opportunity I could. Knowing this would both slow us down, and motivate other people to go around us which is exactly what I needed.

MS: Looking back on the season, what was the key to bringing home your second title in a row? Was there a point where you started to feel comfortable about your chance to clinch it early?

AN: The big word for my season was consistency, by constantly being on the podium I made it very hard for other competitors to fight for the championship. Taylor kept the pressure on me all year, and I never felt comfortable with my lead which is what drove me to keep pushing.

MS: The overall may be in the books early, but you are still chasing the 2017 Summer Series title. Sean Fite stole that one away from you at the finale last year; this season it is again you leading but with two challengers in Alyssa Yauney and Taylor Hays. What is the game plan going into the finale?

AN: Due to the points being so close between the top 3 in the summer championship it pretty much is going to be down to whoever finishes best of the three of us. I’m planning to race just as hard for the summer championship as I did for the overall, but it will be trickier because now I have to manage not just one, but two different drivers. I do have the starting advantage and would love to get to the lead early and pull away.

MS: So far this season you have set new records for number of races led, podiums in a season, and bonus points earned. You are also one win away from tying Sergio Bravo for most career wins… Are the stats something you shoot for at the beginning of the season, or something you keep track of at all?

AN: The balance of risk and reward is always what gets my heart rate going in our endurance races. You have to play the game wisely; every situation has a level of risk that a driver can take with a possible reward from it. Making the right decisions on when, and how to approach situations is what makes endurance racing enjoyable for me. I find IronMan gives me a sneak preview of Machismo. If you make a mistake in an IronMan you only have to live with it for the rest of the hour, however come Machismo any mistake will live with you for the rest of the year. It’s important to learn as much as you can in IronMan, and be perfect in Machismo.

MS: What are your plans for the 2018 season? Are we going to see you go for the 3-peat, or do you think running the Pro Class in the IronMan Series is in the cards?

AN: For 2018 I plan on defending IronMan and going for the 3 peat, running Super Series, and also venturing into Pro karts finally. I hope to buy a VLR sometime next year which I’m excited to use to learn how to setup a kart.

MS: Once again, congrats on your second IronMan Championship Adam, and good luck on Saturday!

AN: Thanks Mike! I want to give a shout out to all my T4 teammates for putting on a dominating season across Super Series, IronMan, and Sprint. Also thanks to everyone who comes out to Calspeed and makes this place a truly special place to hang out on a Saturday. 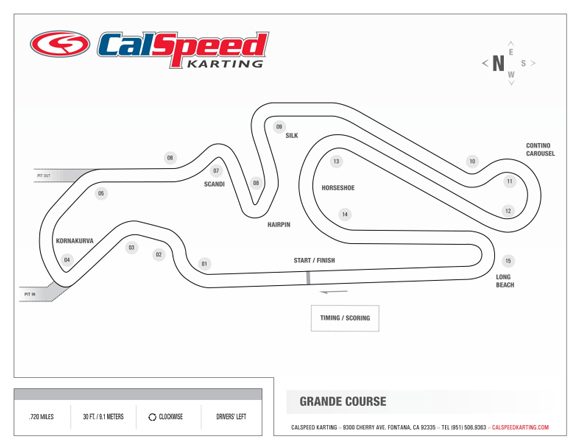 The last time the IronMan Series took to the Grande layout it was round #4, and the surface had been newly repaved in a few sections. At the time the surface was actually quite bumpy and made for some added challenge that will no longer be there this weekend. Instead, the return to the clockwise direction will see the full field of 30 take to a track that is a lot easier on the body, and a bit more straight-forward in how it is approached. There are still a couple of little nuances that are there because of the repave however, with the Long Beach corner being the biggest change to the norm.

The last time we were heading in the clockwise directions was for round #7, as the Classico layout hosted all of the same corners through the entry of Contino Carousel. From there the only two corners that are different are Horseshoe and Long Beach, but they make up for a lot of excitement lap after lap. Both are passing zones, and both play a big part in not only getting the most out of a lap, but also give big opportunities to make something happen in traffic. Horseshoe is a lot smoother this time around, and the grip level is a lot better; perhaps not good enough to maintain position on the outside, but we have seen a lot more fruitful attacks via the outside line than in the past. The Long Beach corner is also a lot smoother, but still has a lot of character to it, and is not the same as it was prior to the re-pave. Finding the best way through there can be a test in patience, and add in the fact it leads to the longest straight, and you have the most important corner on the track. 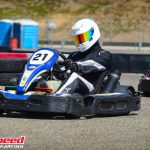 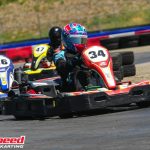 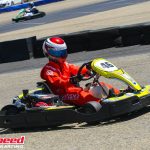 While the overall title has been wrapped up, the Summer sub-championship is still undecided, with just three drivers still in the hunt. And not just in the hunt; they are separated by just 10 points and are also the top three in the overall standings as well. Adam Nagao leads the trio with Alyssa Yauney five points back, and Taylor Hays another 5 astern. Hays is a former winner here, while Yauney scored her first career win on this track in the Spring race. Bonus points will also most likely play a big factor, and we could see some altering strategies just to make sure and be the driver out front. Last year this thing came down to pit strategy, with Sean Fite stealing away the title from Nagao then; it will be interesting to see how this thing plays out now with three different drivers in the hunt. 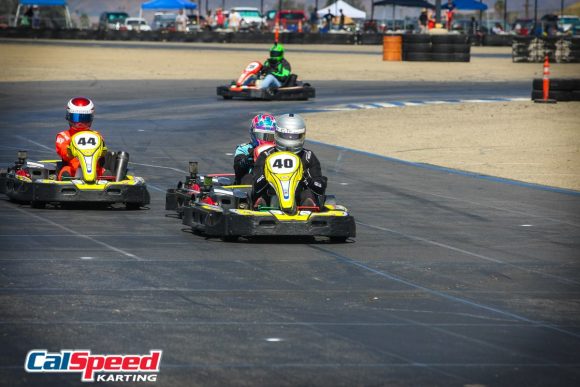 But Hays and Yauney can’t just throw caution to the wind, as they are not locked into their spots in the overall podium just yet -especially Yauney who has no throw outs to fall back on. Granted we are talking a catastrophic round from Hays or Yauney to see positions change there or to see Fite climb into the top 3, especially considering there would have to be a matched round in strength for Fite to close the gap to the duo. But still, anything can and has happened, so there still needs to be a measured approach to the risk versus reward in tomorrow’s event. Take into account the rest of the drivers that makes up the 30 kart field and just about anything is possible. Especially considering the fact there are a few one-off drivers in attendance, there simply to snag some endurance style seat time prior to the 12 Hour. Don’t be surprised if we see some vastly different strategies or curveballs thrown out there by some of these drivers to learn a thing or two prior to December. The front of the field also has a bit of a different look this time around too, with about half the field earning an inverted spot on the grid. There are some new faces in this front half of the field, with the differing experiences certainly being a talking point going in. The opening laps will be extremely important as these drivers look to negotiate every situation on the fly, with all different agendas in play while they do it. This time around, it isn’t just about bragging rights and hardware; knowledge gained this weekend could play a critical part in a bigger prize down the road… 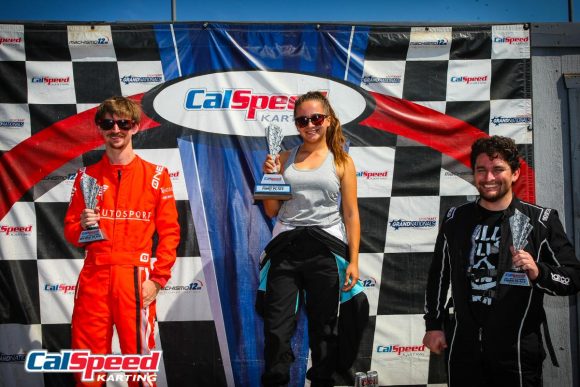