Brackett and Smith Earn Double Podiums for CSK in Round #2!

Sunny skies and somewhat humid temps would welcome the second round of the Tri-C Karters 2018 racing season, with CSK Racing hosting 16 drivers under the team tent. Every one of them save one were returning from the first round, and each were more than happy to ditch the wet weather gear and get to tackle CalSpeed’s fast Grande Counter Clockwise configuration in dry conditions… 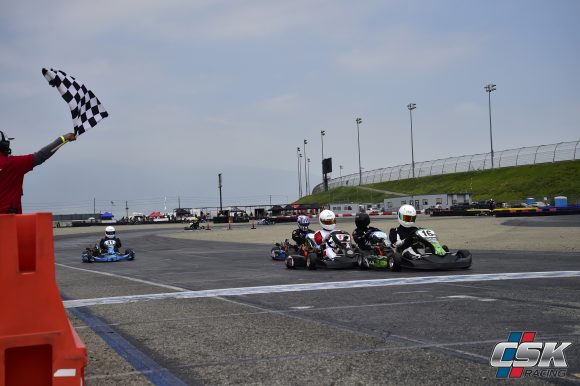 In the VLR Spec 206 class it was the usual suspects again showing pace in qualy, with Jake Hood and Rob Brackett again locking out the front row, duplicating their effort from the season opener. Jake Hood would back up his pole with a pair of 2nd place runs in the heat races, but handling woes would take over as the day went on, and he was unable to match his early pace in the main, settling for an 8th place finish in the end.

Rob Brackett stayed strong throughout the day however, and never straying too far from the front, scoring a 3rd in the first heat, followed by a 5th in the second. In the main he would battle with 206 debutante Adam Nagao for a podium finish, coming up with his first podium in the spec class with a third place finish.

And speaking of Adam Nagao, his Tri-C Karter’s debut was a stout one; qualifying 4th, he then backed it up with a heat win right away. While the second heat did not go his way, getting shuffled back to 6th, he surged forward to be in a podium spot for the main. While battling for third at the end with Brackett, he would end up snagging 2nd at the end after a surprising turn of events.

Which brings us to one of the most impressive drivers thus far, rookie 206 racer TJ Blackledge. He showed impressive pace in round #1 in tough conditions, and again backed that up this past Saturday. Qualifying 5th, he never strayed from the front pack, and then went even better in the second heat race with a third, and fastest lap. In the Main he checked out with the leader, and after dutifully pushing until the end, finally made his move for the lead. He would battle the entire last lap until contact saw his chain come off rounding the final complex, sending him down the order. After the pace he has shown, it is a matter of when -not if- we see this kid on the top step of the podium. 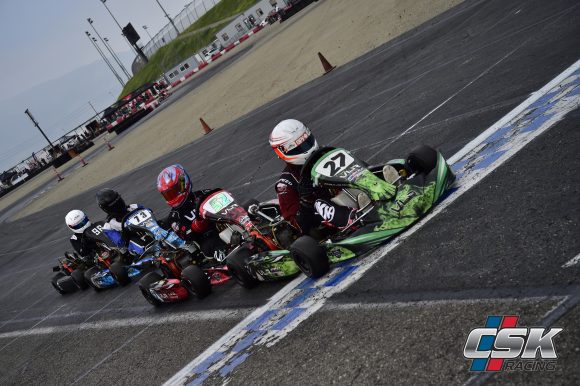 Round #1 winner Derek Esquibel looked like one of the guys to beat again for round #2, qualifying 2nd, then backing it up with a win in heat #1 with one of the fastest laps of the race. Unfortunately in heat two he would have contact while trying to pass for the lead, seeing him relegated to 13th, and with a lot of work in the Main. Still, he would charge back and get a 6th place finish after the 16 lap final, salvaging some solid points for the championship, where he currently sits second.

For team manager Mike Smith, the second round of the championship would be a tough one, starting with a blown motor in Friday practice. Power plant gremlins would continue through the first heat race before the team could sort out the issue, and a 9th place qualifying effort and a 10th place in the first heat were the result. Going to work in the second heat, he would work up to 4th and into a solid position for the final race of the day. In the Main he would find himself among the chasing pack that included 2nd-5th, and although was able to come out on top of that group, could not catch the leader, securing a second place and a solid day in the points. 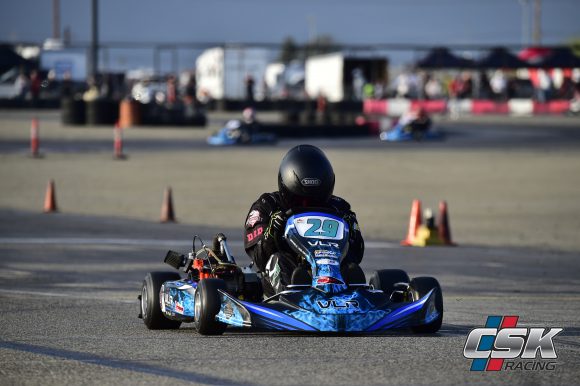 Reigning class champion Mark Connell again led the charge in qualifying with a 2nd overall, backing it up with a 2nd and a 3rd in the heat races. It was a tough day for Connell however, having to get his kart repaired after ‘bicycling’ and crashing into a wall in the first Spec heat race. Battling an ill-handling kart after that incident, he was still able to race at the front of the Masters field in the Main, just getting nipped at the line by Rob Brackett for a podium.

Bracketts’ prowess in qualy continued in the Master’s class, earning the 3rd fastest time in the green-white-checkered session. While he did have a tougher time in the heat races with 5th and 7th place finishes, he bounced back strong to be a part of the podium fight in the main. Battling with the aforementioned Connell and impressive CSK newcomer Lukas Dziemidok, Brackett earned his second podium of the day with a 3rd at the line by just .087 seconds.

Smith’s tough start to the day in Senior was mirrored in Masters, having to dig out of an 11th place starting spot for the first heat race. He was able to fight up to 4th, and after falling back to 5th at the start of heat 2, finished in 2nd with a shot at the win. Linked up with John Crow at the start, the pair settled in and after a couple of lead changes, waiting until the final few laps to duke it out. After pass and repass that saw the lead change hands the last three laps, Smith was able to come out on top for the Masters win.

And spare a thought for CSK Racing driver Jose da Silva; he fought in the top three in both Masters heat races, but a flip in the Spec main event ended his day and he was not able to fight for a podium spot in the Masters main, although had pace to do it. Thankfully he is ok, and will be back racing with us soon!

CSK Racing would like to again thank all of their customers for coming out to round #2 for the 2018 Tri-C Karters season, and we’re looking forward to round #3 on the Grande configuration on May 5th. Want to get in on the fun? Hit us up to get on track in one of our rental packages, or inquire about how you can get coaching from some of the best in the 206 business. And remember, CSK Racing offers VLR kart and part sales trackside at CalSpeed Karting, so feel free to hit us up for all your VLR needs!