One of the best sport kart drivers in the country, Adam Kellerman has found success in all facets of the sport, with wins at the national level, including the 24 Hours of Charlotte. Although from Sykart Indoor Racing in the Pacific Northwest, Kellerman is at home outdoors at CalSpeed as well, and is the only out of town driver to ever win a Super Series event. Expect him to be one of the immediate front-runners in this, his second running of the Sport Kart Grands.

Sitting inside the top five in the Super Series Masters standings, Jose continues to grow in this division, consistently fighting for top honors in the Masters class. Also a winner and top contender in the CalSpeed IronMan Series, Da Silva’s well-rounded experience sees him enter the 2014 Grands miles ahead of where he was in 2013. With more pace and craft then years past, expect to see a career best run out of the Brazilian native this year. 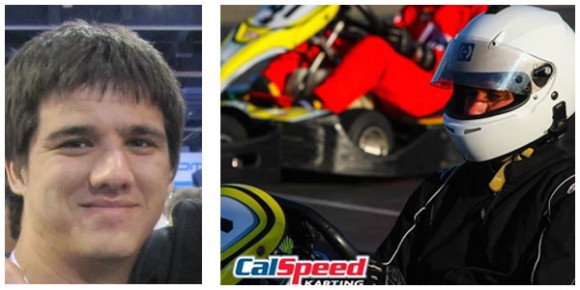 Fresh off his best Super Series round to date, where he won a heat race and started on pole for the A-Main, Adam Nagao’s rise to the front of the pack at CalSpeed has been a steady affair. Proving to the local contingent that he has what it takes to run at the front, Nagao enters the Sport Kart Grands fray for the first time in 2014, and will be eager to carry his recent momentum to a strong finish.

Arguably the #1 contender for the title heading into this year’s championship, last year’s runner-up Darren Mercer came up just short in 2013, but has only improved since. One of the top contenders for the monthly 2014 Super Series championship at CalSpeed, there is no doubt he will carry this momentum into the Grands. While looking to do one better overall in 2014, he will also be going for his 3rd team championship in a row.

“Doing the Double” this year, Andres will be competing in two of the biggest arrive and drive races on the calendar, the Sport Kart Grand Nationals and the Kart World Championship later this summer. Andres made his debut at CalSpeed back in May, and was immediately on pace, scoring a pair of top three’s in his heat races, and a 13th overall in the A-Main. With his extensive experience, he could be a real challenger for the 2014 Grands overall championship.

Driver: Jeff Carson
Hometown: Los Angeles, CA
Home Track: CalSpeed Karting
Team Affiliation: T4 Autosport
Grands Experience: 2012, 2013- 64th Overall (2012), best race finish: 11th
2014 has been a breakout year for the long time CalSpeed sport karter, recently scoring his first career heat win and A-Main run at the sixth round of the Super Series this past Saturday. Given his tremendous growth over the course of the season thus far, the question will be less ‘if’ he will improve over his previous Grands runs, but more ‘how much’ he will improve. Look for Carson to impress over the three-day contest, and score his best finish to date.

Former sport karting National Champion Logan Calvin has turned his focus to competition karting and beyond as of late, making just a single Super Series round this year. However when he did come back out, he finished 2nd overall, and showed that he had lost none of the pace or craft he’s known for. One of the absolute best drivers at CalSpeed, he’ll will be carrying the K1 Speed flag at the Grands this year, and has a great shot at being the first 2-time Champion.

Vitaly may enter the 2014 Sport Kart Grand Nationals as a rookie in the event, and at CalSpeed, but he comes in as the reigning K1 Speed GP champ at K1 Santa Clara. Proving he has things sorted in the electric indoor ranks, he will lead a contingent from the Nor-Cal facility, all making the jump to the outdoor, gas powered world.

Driver: Mike Arnold [M] Hometown: Marina Del Rey, CA
Home Track: CalSpeed Karting
Team Affiliation: N/A
Grands Experience: “Rookie”Long time racer at CalSpeed, Mike Arnold has been a staple in the heavy class, and has been one of, if not the best in the category year after year in the Super Series. Also finding success in the Machismo and other endurance events at the so-cal facility, Arnold makes his Grands debut here in 2014, looking to measure himself up against some of the best in the businesss.

Driver: Sean Brierley
Hometown: Guildford, UK
Home Track: British Rental Kart Championship
Team Affiliation: Briars Racing
Grands Experience: 2012, 2013- 11th Overall (2013), best race finish: 2nd x 2
The only out of country driver to now attend all three years of the contest, Sean Brierley has been the torch bearer for all talent from outside the states. One of the top drivers in qualifying, he hasn’t found the winners circle at the Grands just yet, but consistently finds the sharp end of the field by race end, and is tied for 2nd in all-time top 5 finishes. Improving year after year, Brierley is poised to have his best performance yet, which may see him challenge for the overall title.